Bacteria lend a hand to separate water and oil 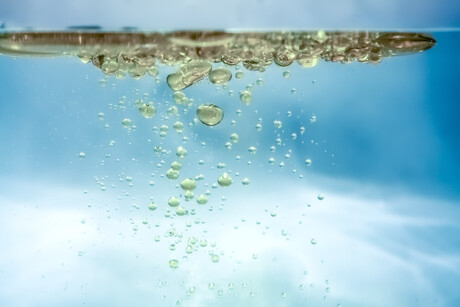 A type of biofilm made by bacteria could become a useful tool in cleaning contaminated water.

Researchers from North Carolina State University (NC State) have discovered that certain bacteria make a slimy but tough biofilm for protection and motility — and it can also be used to separate water and oil.

The researchers used the material produced by the bacteria Gluconacetobacter hansenii as a filter to separate water from an oil mixture, with results published in the journal Langmuir.

“It’s really remarkable to think that these little bugs can make this stuff that is so perfect in many ways,” said Lucian Lucia, the study’s corresponding author and an Associate Professor of Forest Biomaterials And Chemistry at NC State.

The biofilm the bacteria make and release into their environment is made of cellulose — the same material that gives plants a sturdy structure in their cell walls. However, when bacteria make cellulose, it has a tightly packed, crystalline structure.

“It’s one of the purest, if not the purest, forms of cellulose out there,” Assoc Prof Lucia said. “It’s very well structured. It’s very water-loving, and it’s got a very high crystallinity, so it packs very beautifully. Once you strip out the bacteria, you have this amazingly tough material that has a real robustness, or toughness.”

The researchers explained that the bacteria make the film to protect themselves.

“If you leave something like an unwashed dish out, it can turn all slimy and gross — that’s a biofilm,” said study co-author Wendy Krause, Associate Professor of Textile Engineering, Chemistry And Science at NC State. “Different bacteria make different biofilms. The bacterial film that we’re studying is made of cellulose. The bacteria are making it because they live on it and in it. They’re making their home.”

“The oil doesn’t want to go through the membrane; it has a repulsive effect to it,” Assoc Prof Lucia said. “It’s super fat-hating.”

“If the oil and water were highly mixed, it doesn’t matter,” Assoc Prof Krause added. “You could put an immersion blender into the solution, and the membrane will still separate the water and oil.”

The researchers see a variety of potential applications for the material, such as to recover water from an oily mixture, eg, to clean water contaminated with a textile dye or for environmental remediation. In future work, the researchers want to explore how they can tailor the membrane by chemically modifying it for certain applications.

The power of mushrooms to create healthier waterways

A silent experiment is underway in Melbourne to create healthier, cleaner waterways using...