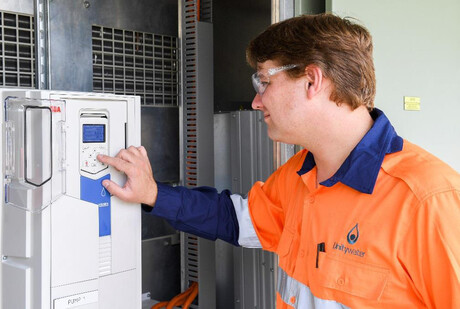 ABB’s ACQ580 water dedicated drives are helping to reduce the occurrence of pump blockages at the Unitywater Deception Bay Pumping Station. This has led to a reduction in maintenance costs of AUD 26,000 per annum, a doubling of water flow and a halving of energy costs, thereby contributing to a return on investment in less than six months.

Unitywater provides water and sewerage services across South East Queensland. It owns and operates 17 sewerage treatment plants within the Moreton Bay, Sunshine Coast and Noosa regions, supporting more than 820,0001 people in the state of Queensland. It provides its customers with a high-quality, safe and reliable water and sewerage service that is economically and environmentally sustainable.

When a series of pump blockages at the Deception Bay Pumping Station led to a significant increase in maintenance costs, Unitywater engaged ABB Value Provider, Control Logic, to come up with an innovative technology-based solution to help get back its wastewater flow.

At a facility that pumps more than 1.2 million litres of wastewater a day, the manual removal of blockages and monthly cleaning was becoming a regular occurrence. Due to the immense size and weight of the submersible pumps, specialised lifting equipment had to be employed to change out the pumps each time a blockage occurred. If both pumps were to fail simultaneously, additional pumping equipment would need to be transported to the site to ensure that flow continued, thereby incurring additional costs. 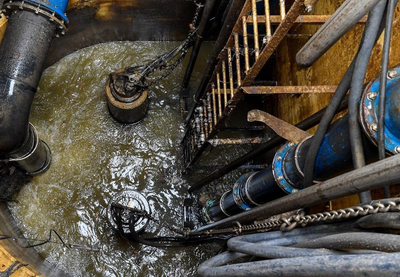 The pumping station comprises two 160 kW submersible pumps with a weight of 1.6 tonnes each. A variable speed drive was housed within an outdoor motor control centre enclosure coupled to each pump and controlled by a SCADA system. Remote terminal units connected the drive into the SCADA system and provided a 4-20 mA speed reference and start-stop commands. The pumps were set up in a duty standby arrangement to ensure continuity of operation in the event of a failure of either pump. Each pump was pumping water into a single pipeline with a head of 70 metres and expected flow rate of 100 litres per second (L/S). 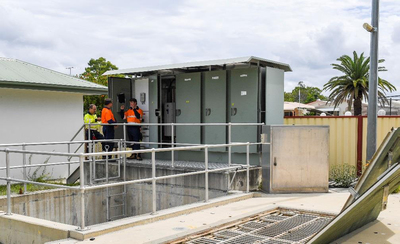 ABB Value Provider Control Logic recommended the ABB ACQ580 water dedicated drive to help Unitywater eliminate unplanned stoppages and maintain wastewater flow at this critical pumping station. The ACQ580 features a built-in pump clean function that automatically clears blockages in pumps by using a series of rapid forward and reverse pumping sequences. Control Logic worked closely with Unitywater to fine-tune the trigger points and the cleaning profiles in order to maximise the effectiveness of the solution. 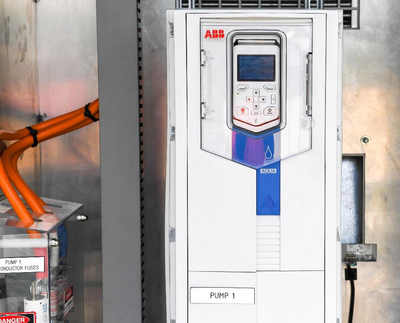 “Torque was used as a reference point for activating the pump clean function. Torque measurements were programmed into the drive via the built-in software feature to create a virtual known pump curve. Trigger points above and below the virtual pump curve were then established and fine-tuned to signal a blockage in the pump. Over time, as system efficiency improved, Control Logic worked closely with Unitywater to reprogram the drive to activate the trigger points from the newly improved system curve,” said Glenn Pike, Control Logic.

One of the challenges to be addressed was taking into consideration the nearby proximity of a non-return reflux valve. The reverse speed of the cleaning cycle was managed very carefully in order to avoid causing damage to the valve. Fine tuning was then done to ensure the maximum cleaning potential without causing disruption to any of the other system components.

“Control Logic worked seamlessly alongside the Unitywater team, to fine-tune the system. This resulted in a technical solution that has delivered a result that has greatly exceeded our expectations,” said Arthur Steel, Electrical Maintenance Manager, Unitywater.

A return on investment of less than 6 months

Leaving the automatic pump clean function activated eliminated the need for regular manual cleaning of the pump, thereby contributing to a significant reduction in maintenance costs of over AUD 26,000 per annum. Whilst it was not the original intention of the trial to reduce the dynamic head, this unexpected consequence also led to further energy and consequential cost savings. In Queensland, Australia, reducing peak average demands on the electrical network leads to a reduction in the utility demand charge component of the tariff. Further reductions in billing costs were also achieved through intelligent drive control.

The combined savings delivered Unitywater with a return on investment of less than six months. Due to the outstanding results that have been achieved at the Deception Bay Pumping Station, Unitywater is now looking to expand the trial to other pumping stations.

“The exceptional payback achieved through deploying the ACQ580 water drive has made it a relatively straight forward decision to expand the trial to other Unitywater sites,” said Arthur Steel from Unitywater.