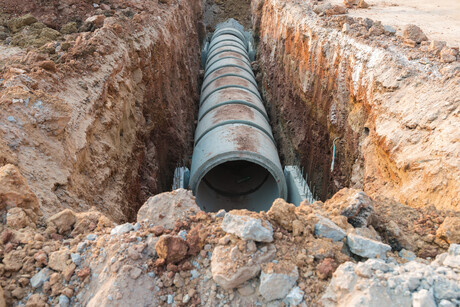 To address the problem of cracking sewer pipes in Australia, a project led by University of South Australia sustainable engineering expert Professor Yan Zhuge is trialling a novel solution designed to halt corrosion in aging concrete pipelines. The project could see 117,000 km of sewer pipes being prevented from cracking without any intervention by humans, and may save $1.4 billion in annual maintenance costs.

The lifespans of pipes are being reduced by corrosive acid from sulfur-oxidising bacteria in wastewater, along with excessive loads, internal pressure and temperature fluctuations, costing hundreds of millions of dollars to repair every year across Australia.

The solution may be ‘self-healing concrete’, in the form of microcapsules filled with water treatment sludge.

“Sludge waste shows promise to mitigate microbial corrosion in concrete sewer pipes because it works as a healing agent to resist acid corrosion and heal the cracks,” Zhuge said.

Microcapsules with a pH-sensitive shell and a healing agent core containing alum sludge — a by-product of wastewater treatment plants — and calcium hydroxide powder will be developed by researchers. This combination will be designed to be highly resistant to microbially induced corrosion (MIC).

To protect from breakage, the capsules will be embedded inside concrete at the final step of mixing. They will release the healing agents when the pH value changes as acid levels build up.

“This technology will not only extend the lifetime of concrete structures, saving the Australian economy more than $1 billion, but it will promote a circular economy as well by reusing sludge that would normally end up in landfill,” Zhuge said.

Existing methods to contain acid corrosion in sewer pipes are unsuccessful for a variety of reasons. Chemicals that may be added to wastewater to stop corrosion are costly and contaminate the environment. Another option involves increasing the speed of sewage flow by amending pipe hydraulics, but this may be ineffective. A popular option is surface coating, but it is time-consuming and temporary.

According to Zhuge, the construction industry is being forced to transit to a circular economy to be carbon-neutral by 2050.

“Industry by-products or municipal wastes that would normally be discarded in landfill sites, potentially generating pollution, may now be reused in the construction production chain,” she said.

A single drinking water treatment plant generates up to 2000 t of treated water sludge annually, most of which is disposed in landfill, causing environmental issues and costing more than $6 million each year. Mainland Australia alone has about 400 plants.

Disposing of one tonne of sludge in landfill releases approximately 29.4 t of carbon dioxide emissions — much higher than cement production — and leaks aluminium into the soil and water, a risk factor for Alzheimer’s disease.

“We are confident this novel self-healing concrete based on advance composite technology will address issues of sewer pipe corrosion and sludge disposal in one hit,” Zhuge said.

The project involves researchers from the University of South Australia and University of Queensland, partially funded by a $501,504 Australian Research Council grant.