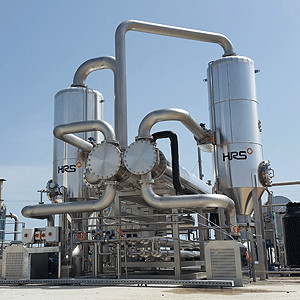 When treating wastewater, sludge and digestate, it can often be beneficial to also reduce the volume of material or increase the solids content. Mechanical dewatering via a centrifuge or belt press to separate solids and liquids is standard for the water treatment and anaerobic digestion sectors — but what if you want to further reduce the water content of the remaining liquid fraction?

The two main reasons to remove or reduce water from effluent and waste are either to reduce the volume of material in order to cut storage, handling and disposal costs or to produce materials with distinct properties (such as liquid and solid fractions of digestate), which can then be stored and used in the most appropriate way. Traditionally, there have been two ways to achieve this: drying and evaporation.

Drying usually requires large quantities of heat and energy, is costly and inefficient, and is unsuitable for materials with high water content. Conventional evaporation techniques require temperatures in excess of 100°C, which are usually achieved by boiling water or steam. However, due to the low temperatures used in wastewater treatment and aerobic digestion, such energy is not usually available without additional fuel inputs, making evaporation a high-energy option.

Heat exchangers are capable of recovering heat from other sources, such as the heat left from the CHP engine or from pasteurisation. Using this as the basis for an evaporation system can improve overall process efficiency. Additionally, using a vacuum in the system to reduce the boiling point reduces the amount of energy required even further.

Combining systems into a multiple-effect evaporator allows larger quantities of water to be removed using the same initial heat input. Each evaporator is held at a lower pressure than the previous one: because the boiling temperature of water decreases as pressure decreases, the vapour boiled off in one vessel can be used to heat the next — only the first vessel requires an external source of heat, which can be taken from another process elsewhere or generated specifically for the purpose.

The type of heat exchanger used will depend on the nature of the products being treated. For materials with low or medium viscosities, such as wastewater and effluent with low concentrations of organic solids, using the HRS K Series as an evaporator module provides high heat-transfer rates with good resistance to fouling. For more challenging and viscous materials, such as thicker effluents, digestate and solids with higher dry-matter concentrations, the HRS Unicus Series contains a self-cleaning scraper mechanism which reduces fouling and maintains heat transfer rates and therefore operational efficiency.

While both the K Series and Unicus Series are commonly used in the type of multi-effect evaporation system described above, both heat exchanger models can be used in other types of evaporator, such as mechanical vapour recompression (MVR) or thermal vapour recompression (TVR) systems, depending on the needs of the product or application. In MVR set-ups, the evaporated steam is sent to a compressor (where it increases in pressure and temperature) and used as the thermal energy source in the evaporation process. Only electrical energy (for driving the compressor) is used in this case. In TVR set-ups, boiler steam can be mixed with evaporated steam in a thermo-compressor, leading to considerable energy savings.

The ultimate use of HRS heat exchangers for low-temperature evaporation can be found in the HRS Digestate Concentration System (DCS), which uses multiple evaporation effects to increase the solids in liquid digestate three- to four-fold.