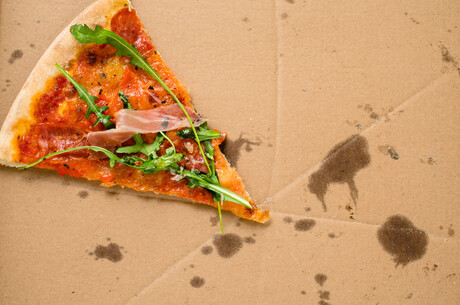 Australians have been consuming more takeaway pizza during the COVID-19 pandemic — and the contaminated evidence is in our recycling bins. According to the Australian Council of Recycling (ACOR), one of the biggest causes of recent increases in contaminated items ending up in kerbside recycling bins is pizza boxes containing food scraps due to more pizza being delivered during the pandemic.

ACOR CEO Pete Shmigel said, “The simple message is: pizza boxes are fully recyclable, but leftover pizza and food scraps ain’t. Eat your crusts, fellow Australians — it’s better for the environment not to leave ’em in the box.”

After burgers, pizza is the second most-consumed fast food in Australia, seeing a double-digit jump in demand since the pandemic began.1 Around 20 million Aussies are likely to have had takeaway pizza last year, with Australia having the 8th-highest per capita consumption of pizza in the world.2

“We’ve seen overall kerbside recycling contamination rates going up to as high as 20% during the pandemic period, and a proportion of that is food scraps as people get more packaged home delivery,” Shmigel said.

“We know that Aussies are trying to do the right thing by placing their pizza boxes in their kerbside recycling bins, but at the risk of sounding like mum or dad, we need them to eat their crusts to make sure the box is recycled into a new box.

“The next time you order that pizza, please remember to recycle right rather than ‘wish-cycle’. Clean out your pizza boxes before placing them in recycling.”