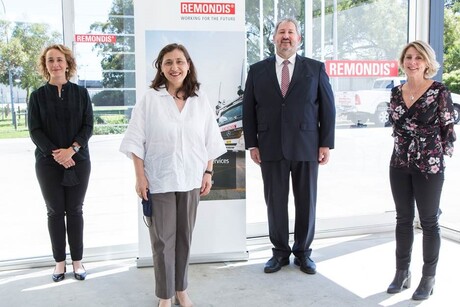 A new recycling facility to be built by Remondis Australia in Dandenong, Victoria, will process a third of the state’s solvent waste each year.

The facility will give cleaning solvents, inks and paints a second life, turning them into products that can be reused by industry, such as secondary cleaning liquids used in spray guns, alternative fuels and raw solvent material.

In addition to reducing the need for storage — which carries fire, health and environmental risks if managed inappropriately — the initiative will significantly reduce the 29,000 tonnes of recyclable liquid hazardous waste that are disposed of each year in Victoria.

Victorian Minister for Energy, Environment and Climate Change Lily D’Ambrosio visited Remondis’s industrial wastewater processing facility at Dandenong (trading as Organic Environmental Solutions), a precinct that will soon be expanded to include a highly specialised solvent recovery facility. She announced the new $9 million recycling facility, which is reported to be the largest of its kind in the state.

“We’re taking the important steps needed to reduce the risks of hazardous waste management. Recycling it where we can means we’re building a cleaner, greener state, creating jobs and generating new value for the Victorian economy,” D’Ambrosio said.

Remondis Australia will build three distillation units within the new facility, which will be able to process up to 9600 tonnes of hazardous solvent waste once up and running in 2024. The Victorian Government is contributing $1.3 million to the project, with a further $10.2 million available for companies looking to invest in hazardous waste management.

Member for Dandenong Gabrielle Williams said, “To have Remondis expand their existing operations to include hazardous waste recycling is great news — it means more local jobs and reducing Victoria’s dependency on raw materials.”

A spokesperson from Remondis added, “Being recognised by the Victorian Government this way is testimony to our abilities when it comes to liquid hazardous waste recycling.

“This facility will be a game changer for solvent recycling in Victoria, turning what would normally be waste into something that can be reused in various products.

“This creates tremendous benefits for the Victorian economy and the environment.”

Remondis has also acquired Waste2Water Technologies and Aquasoil Recycling, which are both based at Somerton.

Waste2Water is a non-hazardous liquid waste processing facility and collection service specialising in many fields including the management of contaminated site water, contaminated stormwater and car wash pit cleaning. AquaSoil specialises in the disposal of drilling and non-destructive digging mud.

These acquisitions give Remondis a strategic liquid waste management foothold in Melbourne’s north, following the acquisitions of Eastern Liquid Waste Services and Organic Environmental Solutions in the city’s east and south-east in 2019.

The ramp-up in Melbourne complements the company’s liquid waste activity in other cities and states around Australia.

A car battery recycling program is allowing RACQ to reduce its environmental footprint and...