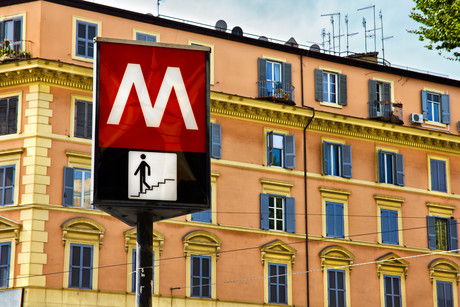 The city of Rome is fighting plastic waste by awarding metro credit to commuters who recycle their PET bottles. The ‘+Ricicli +Viaggi’ initiative, translated as More Recycling, More Travelling, is an experimental campaign that will run over the next 12 months.

Three reverse vending machines have been installed in San Giovanni and Cipro underground stations (line A) and in the Piramide underground station (line B), allowing customers to receive credit towards tickets via the myCicero or Tabnet apps, which are operated by Rome’s transport authority, ATAC.

Recyclers will receive a €0.05 credit for each bottle recycled, accruing funds until they reach the price of a metro ticket; currently €1.50. This translates to about 30 bottles for a metro ride. The bottles will be collected, sorted and then recycled into new bottles.

Rome’s Mayor, Virginia Raggi, introduced a ban on single-use plastics in the city in March. She commented that the pilot project is an innovation to combat plastic pollution, steering the city towards a circular economy.

It is hoped that the 12-month trial will be a success, which will lead to the installation of more machines throughout the city’s metro network.

Environment Minister Sergio Costa commented, “The ideal thing would be to consume less single-use plastic and opt for re-usable bottles. But if you do buy a plastic water bottle or find one littering the street, you can trade it in toward a ride on the subway.”

The initiative follows a similar campaign initiated in Istanbul in 2018, which allows passengers to earn credit on their travel cards by recycling plastic bottles or aluminium cans.