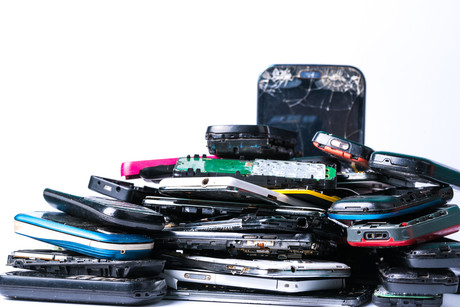 “Australians are high users of technology and among the largest generators of e-waste in the world,” said Leake.

In an effort to stem this worrying trend, Victorian Minister for Energy, Environment and Climate Change Lily D’Ambrosio has launched a $1.5 million public education and awareness campaign to help Victorians better understand e-waste and reduce the amount going to the state’s landfills. Run by Sustainability Victoria, the campaign aims to highlight the value of recycling electronic material ahead of an e-waste-to-landfill ban that takes effect on 1 July 2019.

“Recycling captures valuable metals like copper, silver, gold, aluminium and other metals, as well as plastics and glass, so they can be re-used in the next wave of technology rather than mining or making new materials,” Leake said.

Current practices show that at least 90% of a computer, television or mobile phone can be recovered and re-used. Victoria already has many places where some types of e-waste can be taken, but there is potential to expand the range of electrical, electronic and battery-powered items recycled and the number of collection points.

Victorian councils can also apply for $15 million in grants to upgrade or build collection and storage facilities in 130 areas where need has been identified. Funding applications close on 14 September.

Regulatory measures that will give effect to a ban on e-waste from landfill, under the Environment Protection Act 1970, were made on 28 June. They include amendments to existing statutory policies to include e-waste as a material banned from landfill, and one which specifies how e-waste should be managed safely.

The ban takes effect on 1 July 2019, allowing those who manage e-waste in Victoria to adapt to the new regulatory measures and for Victoria’s e-waste collection network, including state government-funded sites, to be operating.

Queensland Recycling Technologies (QRT) has purchased the recycling business assets of a...

Recycled beverage cartons to be used as building materials

Australian builders will soon be able to replace plywood, particle board and plaster board with...

Minister for Education Alan Tudge has announced $2m for the 'New Options for Waste and Saving...

Oil and snack companies team up to reduce deforestation