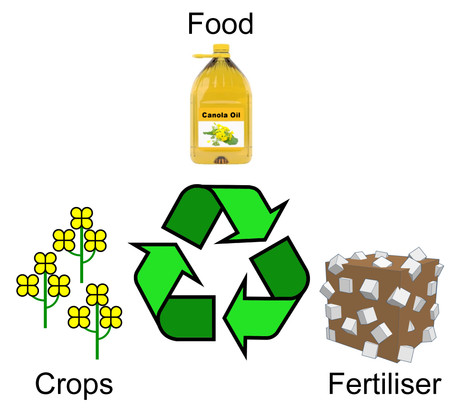 A new type of slow-release fertiliser that results in better plant health and less wasted nutrients has been invented at Flinders University by Dr Justin Chalker and his team in the Institute for NanoScale Science and Technology.

The fertiliser is released slowly into soils because it is encapsulated in a renewable polymer made from canola oil, which is an abundant food waste product.

“We are taking recycled cooking oil, converting it into a fertiliser component and using it to grow more food,” Dr Chalker explained. “It’s an important way to contribute to a circular economy.”

Dr Chalker and his team have created a polymer from waste canola oil and elemental sulfur (a by-product from the creation of petroleum products) as an organic coating for the fertiliser components ammonium sulfate, calcium hydrogen phosphate and potassium chloride.

Nutrients from this slow-release fertiliser are released to the soil after water slowly dissolves and leaches the inorganic components from the polymer-nutrient block. In tests conducted on tomato plants, researchers found the nutrients were released in a controlled fashion, resulting in less wasted fertiliser and better health for the plants growing in this soil.

Results from this study are featured in a special New Talent issue of the journal Organic and Biomolecular Chemistry — which features Dr Chalker among selected leading young researchers from around the world.

The polymer, being formed from waste products that are abundant, is cheap to produce, making it an ideal solution for producing superior fertilisers that are a necessary part of meeting global food production demands, especially in areas with poor soil quality.

This invention builds on other successful products that Dr Chalker and his team have created through polymers using waste canola oil and sulfur — which have proved effective in removing toxic mercury from the environment and cleaning up oil spills.

A significant additional benefit of the polymer’s slow-release qualities is that it prevents fertiliser run-off, which protects the environment, and greatly improves the efficiency of the fertiliser where it is most needed. An estimated 50% of fertilisers that are currently applied to crops are not used by the intended plants, due to leaching and run-off.

This study is a collaboration between Dr Chalker, Associate Professor Michael Perkins and several members of the Institute for NanoScale Science and Technology. The lead authors, Maximilian Mann and Jessica Kruger, are Honours students working in Dr Chalker’s laboratory. Key contributions were also made by Dr Tom Hasell at the University of Liverpool. Dr Hasell and Dr Chalker recently won a $22,000 Royal Society International Exchange Grant, which allows researcher and student exchange over the next two years. Dr Hasell and one of his students, Jessica Smith, are both co-authors on this paper and visited Flinders earlier this year.

The team’s next step will be to conduct larger greenhouse studies of the fertiliser and its long-term behaviour in soils.