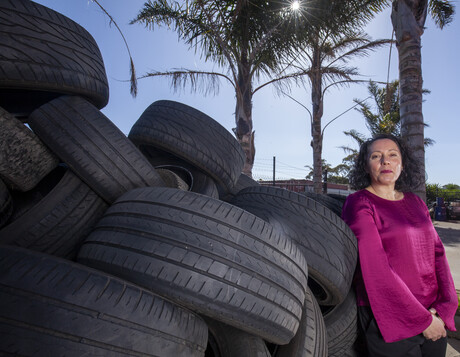 Main Roads WA is working with the Australian Road Research Board (ARRB) and Tyre Stewardship Australia to validate the use of recycling asphalt pavement that contains crumb rubber.

In Western Australia crumb rubber consumption has doubled in the past two years, from between 800–1000 tonnes to nearly 2000 tonnes. Alongside the movement to use a variety of recycled materials in asphalt, road base and spray seal, the road construction industry has been increasing its capability to recycle asphalt itself.

As asphalt is 100% recyclable, contractors are increasingly opting to mill out roads, save the materials and re-use them in new asphalt mixes, which is a material well known as reclaimed asphalt pavement (RAP).

However, one of the major unanswered questions in the industry is: can these mixes containing recycled products then be recycled as RAP when the pavements reach their end of life?

When Zia Rice, Senior Professional Leader at ARRB, sat down to investigate literature on this topic, she found there wasn’t much evidence to answer this question so a study project commenced.

“When we make asphalt mixes that contain RAP, if we are at percentages greater than 20% we need to characterise the RAP viscosity so we can tailor the new mix to a target viscosity. So, we did a laboratory investigation to see how the RAP characterisation was affected by the presence of crumb rubber alongside the practicality testing,” Rice explained.

There were not any issues during this stage when claiming, processing, mixing and repaving the RAP. However, when a larger tonnage of the crumb rubber was examined, the team found some issues with build-up during processing that could reduce efficiencies.

“Despite the slight build-up during processing of larger tonnages, we could see this is something that could be easily rectified by industry if they understand that when they are going through high volumes of this mix, they might need to tailor their plans,” Rice said.

“We found it difficult to characterise the viscosity of a crumb rubber RAP binder due to the presence of the rubber particles. Through our current methods it’s hard to get a representative answer so further investigation is needed there,” Rice said.

“This could facilitate a new design process for level two and three RAP mixes with high percentages; perhaps we will look at an alternative performance indicator rather than target viscosity.”

From here, the next steps will be to investigate how to design new recycled asphalt with crumb rubber and the importance of RAP traceability and separation.

TSA CEO Lina Goodman was thrilled with the project: “This collaborative project is a great example of how important innovation is in the circular economy. Australia generates the equivalent of 56 million used car tyres every year. Around 30% of those end up in landfill or are stockpiled,” Goodman said. “That is why TSA has committed almost $6 million to date to support specific projects and studies, such as this RAP project, aimed at finding innovative and sustainable ways of turning a waste stream into a valuable commodity.”

The project was part of the Western Australia Road Research and Innovation Program (WARRIP), involving Main Roads and ARRB, and was supported by TSA.

The UNTHA ZR two-shaft shredder is designed for waste, wood and metal shredding.