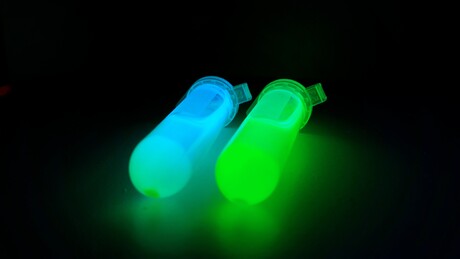 Scientists have figured out a way to produce quantum dots using the spent grain from breweries. Researchers from the Institut national de la recherche scientifique (INRS) in Quebec, working in collaboration with a researcher from the École de technologie supérieure (ÉTS), produced a proof-of-concept model that used microbrewery waste as a source of carbon.

Quantum dots, also called artificial atoms, are nanoscopic particles that can be used for their light transmission properties in cutting-edge technologies including sensors in biomedicine, in inks and for LEDs in displays and screens. Producing them is an intensive process and typically relies on toxic and heavy metals like cadmium. Scientists have been looking to make the quantum dots using carbon sourced from renewable or sustainable sources to counteract the toxic methods used otherwise.

Brewery waste was chosen because it has a high amount of carbon, is readily accessible — so accessible that the researchers worked with a local microbrewery, Brasseurs de Montréal — and is naturally enriched with nitrogen and phosphorous, which means additional pure chemicals are not needed in the production process.

“The use of spent grain highlights both an eco-responsible approach to waste management and an alternative raw material for the synthesis of carbon quantum dots, from a circular economy perspective,” said Professor Federico Rosei, from the INRS.

“This research was a lot of fun, lighting up what we can do with the beer by-products,” said Claudiane Ouellet-Plamondon, Canada Research Chair in Sustainable Multifunctional Construction Materials at ÉTS. “Moreover, ÉTS is located on the site of the former Dow brewery, one of the main breweries in Quebec until the 1960s. So there is a historical and heritage link to this work.”

The researchers wanted to demonstrate that quantum dots could be produced with relatively easily accessible tools, in addition to being made with brewery waste. They used a domestic microwave oven to carbonise spent grain. The resulting black powder was then mixed with distilled water and microwaved again. A passage in the centrifuge and advanced filtration were used to obtain the quantum dots that had been produced through this process.

With some testing, it was found that the dots were of a high enough quality to detect heavy metals and environmental contaminants and they demonstrated their quintessential fluorescence. The scientists have said that they will next want to move beyond this proof-of-concept model to fully utilise the microbrewery waste for making quantum dots that are easy to produce and useful in applications such as sensor technologies.

The full paper describing this process was published in the journal RSC Advances.

Out of puff: end-of-life plan needed for wind turbine blades

Tens of thousands of wind turbine blades will end up in landfill within a decade unless...