Packaging could be made from banana plants 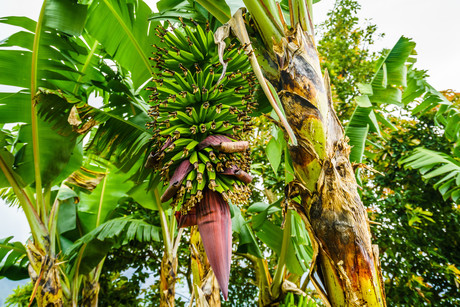 Researchers from UNSW have discovered a novel way to turn banana plantation waste into packaging material that is not only biodegradable, but also recyclable.

Associate Professor Jayashree Arcot and Professor Martina Stenzel were looking for ways to convert agricultural waste into something that could value add to the industry it came from while potentially solving problems for another. A good contender was the banana growing industry, which, according to Assoc Prof Arcot, produces large amounts of organic waste — only 12% of the plant (the fruit) is used, while the rest is discarded after harvest.

“What makes the banana growing business particularly wasteful compared to other fruit crops is the fact that the plant dies after each harvest,” said Assoc Prof Arcot, from the UNSW School of Chemical Engineering.

“We were particularly interested in the pseudostems — basically the layered, fleshy trunk of the plant which is cut down after each harvest and mostly discarded on the field. Some of it is used for textiles, some as compost, but other than that, it’s a huge waste.”

Assoc Prof Arcot and Prof Stenzel, from the UNSW School of Chemistry, wondered whether the pseudostems would be valuable sources of cellulose — an important structural component of plant cell walls — that could be used in packaging, paper products, textiles and even medical applications such as wound healing and drug delivery. Using pseudostem material from banana plants grown at the Royal Botanic Garden Sydney, the duo set to work in extracting cellulose to test its suitability as a packaging alternative.

“The pseudostem is 90% water, so the solid material ends up reducing down to about 10%,” Assoc Prof Arcot said. “We bring the pseudostem into the lab and chop it into pieces, dry it at very low temperatures in a drying oven, and then mill it into a very fine powder.”

Prof Stenzel continued, “We then take this powder and wash it with a very soft chemical treatment. This isolates what we call nano-cellulose, which is a material of high value with a whole range of applications. One of those applications that interested us greatly was packaging, particularly single-use food packaging where so much ends up in landfill.”

Banana pseudostem is dried, then powdered, then placed in alkaline solution to extract the cellulose, which is then processed into films of varying thicknesses. Image credit: Richard Freeman/UNSW.

When processed, the material has a consistency similar to baking paper. Assoc Prof Arcot said depending on the intended thickness, the material could be used in a number of different formats in food packaging.

“There are some options at this point; we could make a shopping bag, for example,” she said.

“Or depending on how we pour the material and how thick we make it, we could make the trays that you see for meat and fruit. Except, of course, instead of being foam, it is a material that is completely non-toxic, biodegradable and recyclable.”

Assoc Prof Arcot said she and Prof Stenzel have confirmed in tests that the material breaks down organically after putting ‘films’ of the cellulose material in soil for six months. The results showed that the sheets of cellulose were well on the way to disintegrating in the soil samples.

“The material is also recyclable,” Assoc Prof Arcot said. “One of our PhD students proved that we can recycle this for three times without any change in properties.”

Tests with food have also proved that the material poses no contamination risks. Prof Stenzel said, “We tested the material with food samples to see whether there was any leaching into the cells. We didn’t see any of that. I also tested it on mammalian cells, cancer cells, T-cells and it’s all non-toxic to them. So if the T-cells are happy — because they’re usually sensitive to anything that’s toxic — then it’s very benign.”

The duo have previously looked into agricultural waste from other industries, having extracted cellulose from both waste cotton gathered from cotton gins and rice paddy husks. Prof Stenzel explained, “In theory you can get nano-cellulose from every plant, it’s just that some plants are better than others in that they have higher cellulose content.”

Assoc Prof Arcot added, “What makes bananas so attractive in addition to the quality of the cellulose content is the fact that they are an annual plant.”

The researchers say that for the banana pseudostem to be a realistic alternative to plastic bags and food packaging, it would make sense for the banana industry to start the processing of the pseudostems into a powder which they could then sell to packaging suppliers.

“If the banana industry can come on board, and they say to their farmers or growers that there’s a lot of value in using those pseudostems to make into a powder which you could then sell, that’s a much better option for them as well as for us,” Assoc Prof Arcot said.

At the other end of the supply chain, if packaging manufacturers updated their machines to be able to fabricate the nano-cellulose film into bags and other food packaging materials, then banana pseudostems could stand a real chance of making food packaging much more sustainable. Assoc Prof Arcot stated, “I think the packaging companies would be more willing to have a go at this material, if they knew the material was available readily.”

Prof Stenzel concluded, “What we’re really wanting at this stage is an industry partner who can look into how this could be upscaled and how cheap we can make it.”

Businesses can no longer ignore Expanded Polystyrene (EPS) as a major waste stream.

Getting junk out of space

In the field: mobility is vital

R U OK?: trust the signs