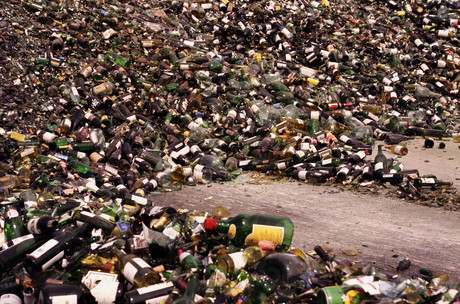 Earlier this week, a damning report on ABC’s Four Corners program revealed that it is currently cheaper to stockpile and landfill glass waste than to recycle it.

The report stated that recyclers are currently receiving more glass than they know what to do with — particularly in NSW, which produces about 460,000 tonnes of used glass per year. But while the NSW Environmental Protection Authority (EPA) is apparently aware of the problem, recycling companies are prohibited from stockpiling large amounts of material due to limits placed by the EPA.

So what are the alternatives? Some NSW companies are choosing to dump their glass waste in landfill, accepting the landfill levy of $138 per tonne in the process. Others are arranging to send their waste to Queensland, where such a landfill levy does not exist. The end result is that NSW’s glass waste is sitting around either in warehouses or in landfills, without getting recycled.

Greens Senator Peter Whish-Wilson has responded to the report, saying that the crisis in Australia’s recycling industry has been “a long time coming”.

“The fall in commodity prices has demolished the previously successful business model based around co-mingled kerbside recycling,” he explained.

Whish-Wilson said the government’s response to this slow-building crisis has been “woeful”. He has called on the Environment Minister to recommit to developing a National Waste Policy, and additionally voiced his party’s support for a national container deposit scheme if the states have failed to act by 2019.

“South Australia gets 10 times the price for glass collected, because they colour-sort glass through their container deposit scheme, and there is less broken glass because refunds only occur on whole bottles,” he said. “This wouldn’t be an issue in NSW if they had the same effective recycling scheme.

“The Greens are also calling for mandatory product stewardship schemes for a range of problematic waste streams, including tyres, mattresses, paint, batteries and other electronic equipment.”

The National Waste and Recycling Industry Council (NWRIC) responded to the news by releasing its Industry Roadmap, a national plan for a circular economy offering regulatory solutions to improve Australia’s waste and recycling industry.

According to the council, Australia’s largest waste and recycling companies believe the interjurisdictional variation in landfill levies undermines new investment into resource recovery infrastructure, particularly in NSW. As a solution, the council has called for all states to recognise the portability of landfill levy liabilities and put in place regulations to collect these wherever waste is landfilled.

The council did reject the ABC’s claims that Australia’s waste and recycling industry is poorly managed and “dysfunctional”, claiming the industry performs well in terms of protection of public health, environmental protection and providing green collar jobs. The NWRIC believes that with improved planning, regulatory harmony and effective re-investment of landfill levy revenue, the economic, social and environmental performance of the industry will continue to improve.

Waste Management Association of Australia (WMAA) CEO Gayle Sloan also defended the industry, saying there are only some operators who “do not meet the high standards which the majority of the industry follows”.

“That’s why good regulation is needed to continue to develop a waste and recycling industry which is fair, safe and sustainable for all,” she said.

The association noted that the issue of interstate transportation and landfill levies is not new, claiming that industry and WMAA have been highlighting the problem of landfill price disparity for years. The solution, according to the association, is a harmonised approach to landfill levies across Australia, which need to be set at a high enough level to reflect the true cost of landfilling and to encourage alternative recycling approaches.

Sloan said the industry should also be talking about finding new sustainable markets for recycled products — and committing to buying these products. She noted, “We have all the technology we need to solve these issues and make products that perform just as well or better than their virgin counterparts … The challenge is making sure that recycling is commercially viable, and for that to happen we need people to put their money where their mouths are, and actually buy products that are made with recycled materials.”

Finally, sustainability consultancy Edge Environment used the story to argue the case for diverting waste to landfill, as well as avoiding waste generation in the first place.

“Despite the lack of incentives for waste contractors to do the right thing, with the right approach, thousands of dollars can be saved by businesses that divert waste going to landfill,” said Blake Lindley, who heads the waste recovery work of Edge Environment.

“One of our clients is saving $1.2 million in waste costs per year by increasing their operation’s resource recovery and by monitoring their waste contracts.”

Edge’s experience is that there is almost always low-hanging fruit across all sized businesses to avoid and reduce waste, with chairman and co-founder Tom Davies saying many businesses can avoid generating waste in the first place by following the concept of a circular economy — the notion that someone’s output is someone else’s input. Looking at waste and resource as one therefore allows for innovations in design and in how products and services flow in the economy, the company said.

Blake Lindley from the Australasian Circular Textile Association shares his opinion after the...

Navigating the challenges in waste and recycling regulation

Recycling and Waste: a compliance snapshot is provided by two partners at McCullough Robertson...