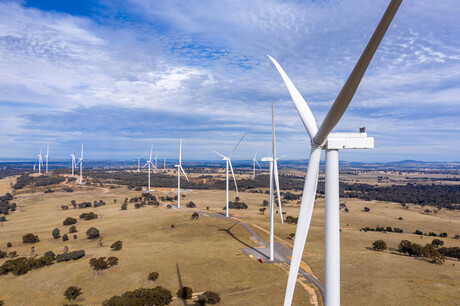 Woolworths Group has partnered with CWP Renewables on a 10-year agreement to purchase power generated by Bango Wind Farm, currently under construction near Yass in the Riverina area of NSW. The renewable power purchase agreement (PPA) will supply 30% of Woolworths’ NSW electricity needs, equivalent to powering 108 stores or 34,000 households.

“We know the steps we take to become a more sustainable business today will help create a better tomorrow for generations to come,” Woolworths Group Director of Format Rob McCartney said. “Going beyond net carbon neutral, we’ve committed to take more carbon out of the atmosphere than we produce by 2050 and our first renewable power purchase is a key milestone in that pursuit.

“Supermarkets are particularly energy intensive to run and we want to use our scale for good by supporting the transition to renewable electricity,” McCartney added.

“To spur the growth of the industry, we’re prioritising renewable energy from new-build projects like the Bango Wind Farm, which also demonstrates the potential of green energy to deliver investment and jobs to regional areas.”

Woolworths Group’s PPA will support more than 100 jobs in construction and operation of the Bango Wind Farm. The project will pay annual rents to local landholders whose properties host wind turbines and CWP Renewables will establish a $14 million fund for community projects.

“With Woolworths’ decision, CWP Renewables is developing both stages of the approved Bango Wind Farm and will be generating renewable energy for Woolworths from the start of next year.”

Woolworths Group accounts for around 1% of Australia’s total energy use, representing a significant influx of green electricity to the national grid as it converts to renewable sources by 2025. The business will continue to explore opportunities to invest in power purchases from renewable projects directly. It will also look to partner with energy retailers on supply contracts that draw on new-build renewable projects to accelerate the availability and affordability of green energy, providing more choice to Australian households.

NSW Energy Minister Matt Kean said he was pleased to see more companies and businesses enthusiastically entering the renewable energy market in NSW. He said, “This is great news and further proof that the NSW electricity infrastructure roadmap is providing the certainty to businesses and energy market investors to make financial decisions that will help power our state into the future.

“I am fully supportive of all energy market investment in NSW, but this partnership and agreement is particularly significant because it is prioritising the building of new infrastructure, providing for local jobs and investment and helping us grow our renewable energy base.”

On target for the planet

Woolworths Group’s progress takes it closer to its carbon reduction target of 63% by 2030 — a goal reported to be the first Australian retail target to be endorsed by the UN-backed Science-Based Targets Initiative in line with the business’s contribution to limiting climate change to 1.5°C.

Since 2015, the Group has reduced its carbon emissions by around 25% through a range of energy-efficiency initiatives including LED light conversion and refrigeration optimisation, including the introduction of natural refrigerant gases.

Woolworths monitors its energy consumption across supermarkets through an Energy Management Centre that tracks electricity use in real time, pinpointing peaks and patterns to support energy-reducing interventions, cutting consumption for some stores by up to 10%.

“Woolworths committed last year to make the switch to 100% renewable electricity by 2025 — and we’re big fans of the company’s announcement today of a substantial wind power purchase from the Bango Wind Farm,” she said.

“In committing to source its renewable energy from new-build wind and solar power, like the Bango Wind Farm, Woolworths isn’t just speeding its own transition to 100% renewable electricity — the company is also helping to bring significant amounts of new, clean, reliable renewable energy into the system.

“In addition, Woolworths’ renewable energy purchase partnership supports over 100 jobs in the wind farm’s construction and operation for the Yass region. Renewable energy is already getting the job done, and big supermarkets like Woolworths making big wind power purchases shows that renewables can power even the largest and most complex businesses.”

Woolworths, Coles and ALDI have all committed to 100% renewable electricity by 2025, meaning that all of the country’s top supermarkets will be wind and solar powered within the next five years.