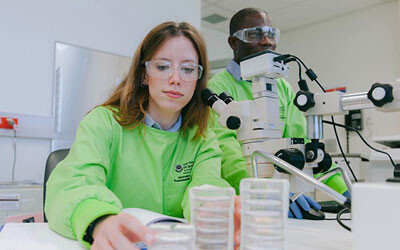 University of Queensland (UQ) research reveals that seafood such as prawns, oysters and crabs is contaminated with plastic, with the highest levels found in sardines. The results are published in Environmental Science & Technology.

Lead author Francisca Ribeiro, from UQ’s Queensland Alliance for Environmental Health Sciences, said the study was an important step to understanding the potential harm microplastics in seafood could have on human health. Ribeiro is currently completing a PhD in the field of environmental toxicology, with a shared scholarship between UQ and the University of Exeter.

“We found polyvinyl chloride — a widely used synthetic plastic polymer — in all samples we tested, but the most common plastic in use today — polyethylene — was the highest concentrate we found,” Ribeiro said.

“From the edible marine species tested, sardines had the highest plastic content, which was a surprising result.

“Another interesting aspect was the diversity of microplastic types found among species, with polyethylene predominant in fish and polyvinyl chloride the only plastic detected in oysters.”

Microplastics are tiny pieces of plastic that pollute the marine environment and are eaten by organisms of all types, from small larvae and planktonic organisms to large marine mammals.

As well as seafood, studies to date reveal that microplastics enter our diet via bottled water, sea salt, beer and honey, and from dust that settles on our meals.

The method developed and used by the UQ research team is a major step forward for plastic quantification techniques in seafood as it allows results to be reported in a mass unit, which hasn’t been done before.

“We can now define what microplastic levels can be considered harmful to human health,” Ribeiro said.

The next phase of the research project is to identify the sources of the plastic contamination found in the seafood tested.