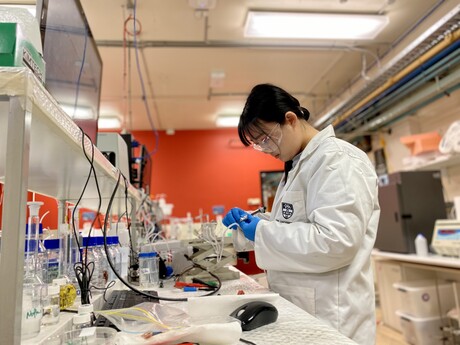 An engineering researcher from the University of Sydney, in collaboration with a team at the University of Toronto, has developed an electrochemical system that can covert carbon (CO2) into valuable products. The findings are published in Science.

Carbon capture and storage has been cited by the International Energy Agency as a strategy that can help keep global emissions low enough to limit global warming to 1.5°C by 2050. However, due to the low economic value of captured carbon, there is little incentive for companies to invest in carbon-capture technologies.

To address this issue, the research team designed advanced electrolysers — machines that use electricity to convert captured CO2, plus water, into the building blocks of common everyday materials such as plastic and lycra. This helps create a market for captured carbon, while also providing a low-carbon alternative to fossil fuel-based manufacturing processes.

Unlike previous systems, the team’s latest design can be run under strongly acidic conditions, which reduces undesired reactions and enhances overall efficiency.

“Our research differs to previous approaches. Instead of choosing between an efficient use of electricity or efficient use of carbon, we do both,” said Dr Fengwang Li from the University of Sydney’s School of Chemical and Biomolecular Engineering. “This electrolyser enables the creation of high-value products such as ethylene.”

Ethylene is the most commercially produced organic compound in the world, used across many industries, including in metal fabrication and the manufacture of medical devices.

Dr Li and the team’s electrolyser utilises captured CO2, which flows over a solid catalyst through which electricity is supplied.

“Previous systems operated in alkaline or neutral conditions, meaning most of the CO2 was wasted, and would be converted into carbonate instead. By contrast, our process, using high acidity, retains CO2 at rates of up to 70%,” Dr Li said.

The researchers said that, while the carbonate can be extracted, converted into CO2 and fed back into the electrolyser, doing so is energetically costly. The team’s calculations show that more than half of the energy consumed by the overall system would be spent on recycling the carbonate in this way.

Running the electrolyser under low pH, or acidic, conditions prevents the formation of carbonate but introduces a different problem: hydrogen ions in the acidic solution get converted to hydrogen gas, leaving few electrons available to combine with CO2.

The team dealt with this problem by combining two strategies. First, under acidic conditions, they increased the electrical current, flooding the reactor with electrons. Hydrogen ions rushed in to react with them, but got caught in a molecular traffic jam, a technical term called mass transport limitation.

“In effect, we’re creating a reactor that is acidic throughout, except for a tiny layer within less than 50 micrometres of the catalyst surface,” said co-author and University of Toronto researcher Haoming Erick Huang. “In that specific region, it is not acidic, in fact it’s slightly alkaline. There, CO2 can get reduced to ethylene by those electrons.”

The next step was to add a positively charged ion — in this case potassium — to the reaction. This created an electric field near the solid catalyst that made it easier for CO2 to be absorbed by the surface, giving it the edge in the competition with the hydrogen ions.

The two changes made a big difference. Previous systems typically utilised less than 15% of the available CO2, losing the rest to carbonate. The new system utilises about 77% of available CO2, with more than 50% being converted to multi-carbon products.

There are still hurdles to be overcome before this system can be scaled up to an industrial level, including the stability of the catalyst when its size is increased and the need for even further energy savings.

Image caption: PhD candidate Shuzhen Zhang, who contributed to this project, samples the outlet stream from the electrochemical reactor for product analysis. Credit: University of Sydney.