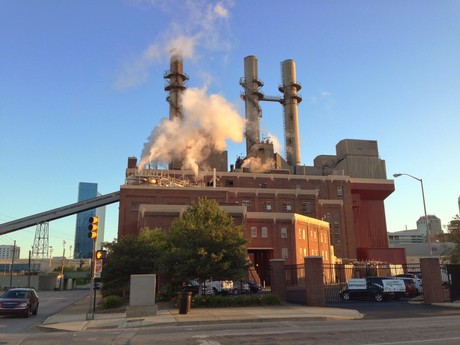 An international team of researchers has uncovered an effective method for scrubbing carbon dioxide from smokestack emissions. Published in Nature, the study used data mining to address the water portion of smokestack gases, which complicates the removal of CO2.

Oregon State University chemistry researcher Kyriakos Stylianou and colleagues from the École Polytechnique fédérale de Lausanne, Heriot-Watt University in Scotland, the University of Ottawa, Canada, and the University of Granada in Spain investigated hundreds of thousands of nanomaterials known as metal organic frameworks (MOFs). Via adsorption, MOFs hold the potential to intercept CO2 molecules as the flue gases make their way out of the smokestack.

Flue gases can be dried, but that adds significant expense to the CO2 capture process.

“There are a countless number of structurally and chemically distinct MOFs, but the challenge with most of them is that they do not perform well when subjected to testing with realistic flue gases,” Stylianou said.

“The water in flue gases competes with the CO2 for the same adsorption sites, which means those MOFs are not scrubbing selectively like we want them to.”

The researchers sifted through more than 325,000 MOFs in a digital library, identifying different types of CO2 binding sites — which they dubbed ‘adsorbaphores’ — that would maintain their selectivity in the presence of water.

In the lab, doctoral student Arunraj Chidambaram made two of the MOFs that contained a hydrophobic (water-repelling) adsorbaphore, consisting of two aromatic cores, and tested them. Not only was the separation performance of the MOFs unaffected by water, they also outperformed some of the CO2 removal materials currently on the market such as activated carbon and zeolite 13X.

“We went from design to synthesis and application,” Stylianou said.

“We used computations to discover active sites for CO2 capture. The MOFs performed optimally for wet flue CO2 capture because these MOFs have two distinct sites in their structures — one for water and one for CO2, and therefore, CO2 and water molecules do not compete with each other.”

Further research will investigate scaling up to the challenge of industrial CO2 emissions.

More than three-quarters (80%) of young families surveyed in a new study agree Australia could do...