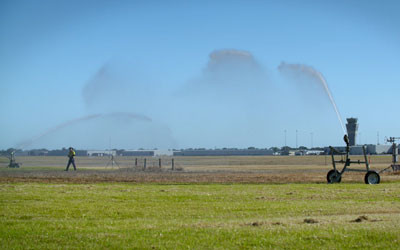 SA Water and Adelaide Airport are set to share the results of an industry-leading heat mitigation trial with more than 1000 delegates at the Airports Council International’s Airport Exchange conference series, being held in Abu Dhabi this week.

The trial, which has been underway for three years at Adelaide Airport, has found the smart use of water to maintain soil moisture and cultivate green space can reduce average ambient temperatures by more than 3°C on warm days and potentially lower heat-influenced costs like air conditioning and aircraft performance.

The concept creator, SA Water Manager of Environmental Opportunities Greg Ingleton, said the methodology could lead to a sustainable reduction of an airport’s carbon footprint and be transferred to improving the livability of cities around the world.

“The extensive hard surfaces and cleared land around airports means they can often become sources of increased heat, which impacts both terminal and airside operations,” Ingleton said.

“In warmer, less dense air, planes must travel faster down the runway to produce the lift needed for take-off. When a runway lacks the distance required to reach these speeds, a plane’s weight must be lowered, or the aircraft needs to use more fuel, impacting commercial aspects of an airline.

“Two years ago, in Arizona in the United States, 50 flights were cancelled in one day due to it being too hot for the planes to take off.”

Adelaide Airport Sustainability Manager Leigh Gapp said the trial has the potential to benefit airline customers on hot days through reduced fuel burn, which in turn reduces their carbon emissions associated with take-off.

“Reducing the ambient temperature also can reduce terminal energy costs associated with cooling,” Gapp said. “We are continuing to explore both of these options.”

Recycled water from SA Water’s nearby re-use scheme was applied to four hectares of lucerne 600 metres south of the airport’s runway, twice a week at night, to create the cooling effect, and also showed the space can produce revenue-generating food crops.

“We’re also investigating the ability to create carbon credits from growing the crops, demonstrating carbon sequestration whereby the plants absorb CO2 and use it as fuel for growth by locking it in the soil,” Ingleton said.

“Our recent economic analysis, which was based on an expansion of the irrigation area to 200 hectares, suggests innovative initiatives like this can provide a range of operational efficiencies and wider benefits for airports, and we’re hoping these findings will turn a few heads in Abu Dhabi.

“Expanding our exposure and experience to diverse climates and landscapes will also enhance our capability right here in South Australia, and help implement heat mitigation in a range of other urban environments, such as schools and council parks, to improve livability.”

Held from 25–27 November at the Abu Dhabi National Exhibition Centre, Airport Exchange is focused on building and operating less-impactful, zero-carbon airports. The exhibition is attended by representatives from some of the world’s largest airports, including Dubai, London Heathrow and Munich.

Port of Newcastle has been certified as an EcoPort under the global environmental and...