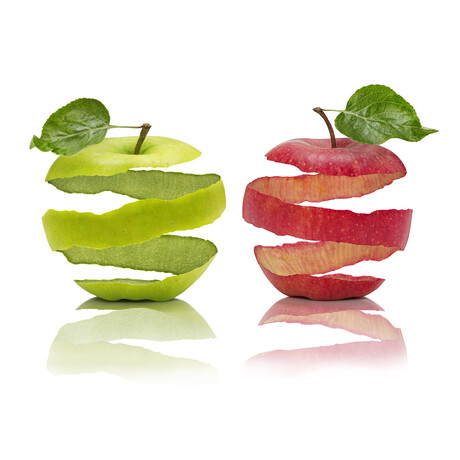 A ‘greener’ process for extracting health-promoting molecules found in agricultural and food waste has been identified by researchers at the University of Adelaide. The molecules can be repurposed in products such as skincare and pharmaceuticals.

With results published in Green Chemistry, the researchers trialled using greener solvents to collect compounds found in apple pomace, which are known for their powerful antioxidant, antibacterial, anti-diabetes and anti-inflammatory properties.

“Currently only around 20% of apple waste is retrieved and used as animal feed. The rest is incinerated, or sent to landfill or composting, which releases significant amounts of greenhouse gases.”

Apple pomace — consisting of peels, pulp and seeds — is known to be rich in molecules known as ‘flavonoids’, which help regulate cellular activity and fight off free radicals.

“Extracting the ‘goodness’ from apple pomace is one way to make better use of this waste product and could help the apple processing industry become more sustainable,” Dr Yu said.

However, because the health-promoting extracts found in apples have low solubility in water-based solutions, up until now they have been difficult to collect without using toxic organic solvents, which generate large amounts of pollutants.

To address this problem, the researchers investigated an extraction process using a new generation of green solvents known as deep eutectic solvents (DES). These inexpensive solvents consist of natural molecules, providing a greener alternative to volatile and toxic organic solvents due to their superior extractability, negligible volatility and non-flammability.

The researchers developed an optimised approach using the green solvent to simultaneously collect and modify the health-promoting molecules pulled from apple pomace.

Compared with traditional solvents, the amount of bioactive compound pulled from apple pomace using the DES solvent was significantly higher than that collected using traditional solvents. Professor Vincent Bulone from the University of Adelaide’s School of Agriculture, Food and Wine, who supervised the research and co-wrote the paper, said they also found the antioxidant activity in the extracts was significantly higher than in samples obtained by conventional solvent extractions.

“We can conclude that DES is a green and tuneable alternative that not only efficiently collects powerful healthy molecules found in apple pomace, but also boosts the antioxidant activity of the extract. Not only do DES provide a more environmentally friendly way to make better use of what would otherwise go to waste, but the collection method may provide a way to improve skincare, biopharmaceuticals and nutraceuticals,” Professor Bulone said.

The researchers say the same principle and approach could also be used to collect and modify other health-promoting molecules from other agricultural and food waste.

The facility will enable scientists to develop the next generation of advanced materials to...

Sydneysiders are taking advantage of a City of Sydney pilot program to recycle tricky items and...

Edge Environment is partnering with Frontier Economics to help advise businesses on their...