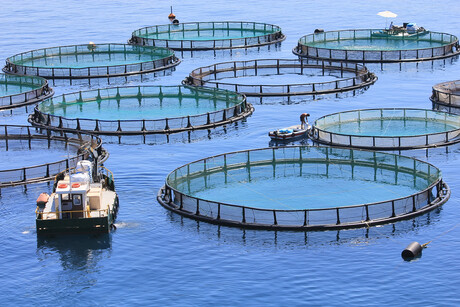 A more sustainable global fish economy could be created by using food scraps to make high-quality food for farmed fish, according to a team of researchers at The University of Western Australia (UWA).

The research, funded by the Fisheries Research and Development Corporation, found organic food waste destined for landfill could be repurposed and used to raise black soldier fly larvae, which could then be fed to farmed fish to achieve better fish growth and performance. The insect larvae — which are high in vitamins, minerals and essential amino acids — contain about 40% protein and 30% fat, making them a promising food to use in aquaculture environments.

PhD student Katarina Doughty, from UWA’s Oceans Institute and School of Biological Sciences, said the global dependence on farmed and wild-caught fish products is rising, with about three billion people relying on seafood as a primary source of protein.

“The population is expected to exceed 9.6 billion by 2050 and the seafood sector is under great pressure to maximise production, while remaining within sustainable planetary boundaries,” Doughty said.

Aquaculture — a practice which involves cultivating aquatic animal populations such as freshwater and saltwater fish under controlled conditions — is becoming an important source of human food.

“Globally, we are harvesting wild fish at their maximum levels, which makes further reliance on wild-caught fish unsustainable,” Doughty said, adding that further development would be needed before aquaculture facilities could deliver long-term sustainable food production.

“Aquaculture can fill the gap between wild harvesting limits and consumer demand, but only if we develop sustainable feed alternatives that maintain fish growth, performance and health. Cultivating fish populations in aquaculture facilities often relies on wild-caught fish or agricultural sources, like poultry and soybean, which could be used directly by humans rather than as a feed source for high-value fish.”

Doughty is researching the use of black soldier fly as a feed source for rainbow trout, a globally important aquaculture species which is grown in 75 countries and almost every continent.

“I hope to use the findings of my research to develop new sustainable farming practices specific to both species, with the goal of aiding the development of sustainable aquaculture industries in Western Australia,” Sewell said.

The work is supported by the Fisheries Research and Development Corporation in collaboration with WA’s Department of Primary Industries and Regional Development, Future Green Solutions, Ridley Agriproducts, GEA and ChemCentre.

Traditional Owners and scientists across Australia are meeting to empower and enhance a First...

Toyota has opened a new $7.4 million Hydrogen Centre in Altona, Victoria, reported to be the...