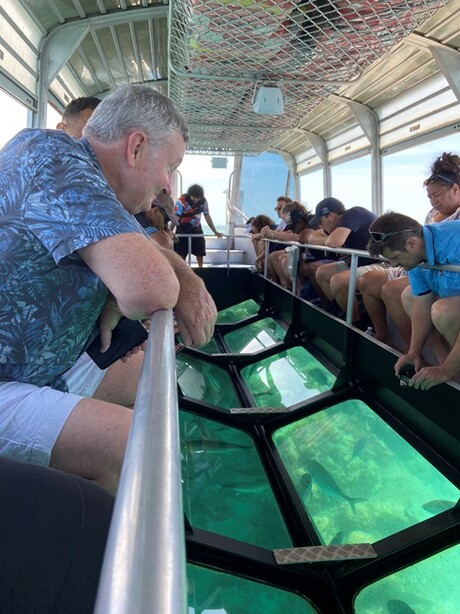 The National First People’s Gathering on Climate Change has seen Traditional Owners and scientists across Australia meeting to empower and enhance a First People’s-led response to climate change.

The five-day Gathering, held in Cairns, Queensland, brings together more than 120 Traditional Owners, representing more than 40 different First People’s groups, and scientists to share knowledge and co-design and develop adaptation and mitigation strategies.

Conversations over the five days will aim to provide communities with the tools to respond to climate change-induced events like marine heatwaves, rising sea levels, bushfires and heatwaves, which have a significant impact on First Peoples on Country, particularly in remote and isolated communities.

“We need to understand and prepare for climate change now and into the future,” Mr Gudjugudju said.

“We always had dialogue together, between different Traditional Owner groups, as climate changed in the past. We need to continue these dialogues today.”

Gavin Singleton, Yirrganydji Traditional Owner from the Cairns area, said that First Peoples were on the front line of the changing climate.

“From changing weather patterns, to shifts in natural ecosystems, climate change is a clear and present threat to our people and our culture,” Mr Singleton said.

“While there is an obvious need to enhance and support the ability of First Peoples to adapt to a changing climate, this gap will only be addressed if First Peoples are engaged and included at the design stage of research.

“The Gathering has provided an opportunity for us to redefine what this process of collaboration should look like,” he said.

NESP ESCC Hub Leader and CSIRO scientist Dr David Karoly said that the Hub was proud to facilitate the dialogue between First Peoples and climate scientists at the Gathering, which built on previous events held in 2012 and 2018 in collaboration with the Yorta Yorta Nation Aboriginal Corporation.

“Climate science has helped to establish a clear line of evidence of a changing climate due to increased human fossil carbon emissions, and many First Peoples are already using climate change science to care for Country and communities,” Dr Karoly said.

“There is an immense opportunity for climate scientists and Traditional Owners to work together. The Gathering will build strong relationships and forge positive paths forward to tackle common climate challenges.

“The Gathering is an Indigenous-led, co-designed process that has been developed with a First Peoples-led Steering Committee of 10 Traditional Owners and the ESCC Hub. It’s all about First Peoples having a genuine seat at the table, and the way we have designed this event reflects just that,” he said.

Bianca McNeair, Co-Chair of the First Peoples-led Steering Committee, has been working with the Steering Committee for the past three years in preparing for the Gathering on the lands of the Gimuy Walubara Yidinji and the Yirrganydji people.

“The Gathering has provided a critical space for Traditional Owner groups to share their experiences and discuss pathways forward to help their communities adapt,” Ms McNeair said.

“We are really excited to produce tangible and useful materials for our participants to take back to communities.

“These products explain climate change and hazards in the face of extreme and accelerating events affecting Country, and the hope is that they will help communities put in place effective and tailored climate change adaptation pathways,” she said.

The National Party of Australia has finally agreed to support, 'in principle', a net zero...

All-Energy Australia will host a free-to-attend virtual conference from 19–28 October, with...

Tree trial to cool one of Sydney's hottest suburbs

The south-west Sydney suburb of Rosemeadow has less than 6% existing canopy cover and is...