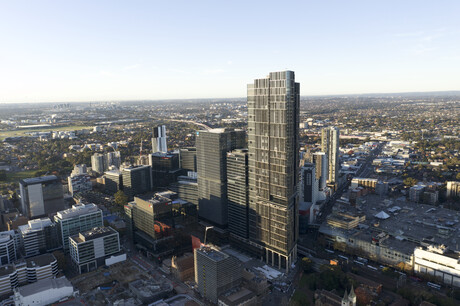 Walker Corporation’s 4 Parramatta Square in Sydney’s west has been given a 6 star NABERS rating for energy — the highest number of stars that can be awarded. The rating means it has one of the highest NABERS ratings in Australia for energy.

NABERS, which is short for the National Australian Built Environment Rating System, is a government initiative used to describe the sustainability of different classes of buildings. Buildings need to renew their ratings each year and those that commit to annual ratings often see their energy use and carbon emissions reduce.

“The $3.2 billion development at Parramatta Square has sustainability at its core and we pride ourselves on saving energy and being water wise on every floor,” said Lang Walker AO, Executive Chairman of Walker Corporation, which developed the building.

“4 Parramatta Square’s state-of-the-art environmental features were carefully designed and delivered to make a big impact on reducing carbon emissions and we are proud to receive this incredible accolade on behalf of our tenants.”

In addition to its energy rating, 4 Parramatta Square also received a 5.5 star NABERS water rating. It also achieved a 92% recycling rate, with all the construction and demolition waste taken to a materials recovery facility to reduce the carbon and landfill contribution.

“Parramatta Square has delivered another six star performance,” Walker said. “The NSW Government specifically sought modern, sustainable, A-grade office space in Parramatta with market-leading sustainability design and we are proud our workspace sets the best example for efficient buildings across the state.”