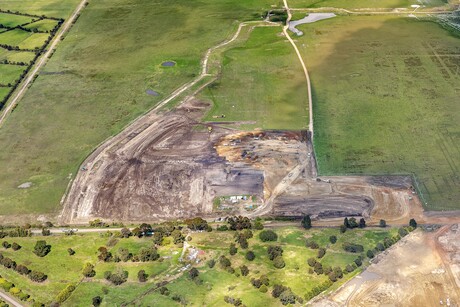 Stockland Evergreen in the south-east Melbourne suburb of Clyde is set to use more than 19,000 tonnes of Downer Group’s road surfacing material known as Reconophalt — a type of asphalt that is designed to be environmentally friendly and not exude harmful fumes.

Similar in look, feel and durability to standard asphalt, the material contains high levels of recycled content derived from waste streams, such as soft plastics, toner, glass and reclaimed road that would otherwise be sent to landfill or stockpiled. In total, the Evergreen project will see 16.9 million plastic bags, 493,000 printer cartridges, 7600 tonnes of recycled asphalt and 2380 glass bottles diverted from landfill — saving the equivalent of 218 tonnes of carbon dioxide and taking 90 cars off the road for one year.

The use of Reconophalt at Stockland Evergreen follows its adoption at stages of Stockland Minta in Berwick and Stockland Katalia in Donnybrook, and builds on the company’s commitment to achieve net zero carbon emissions by 2028. The Evergreen Reconophalt project is a collaboration between Stockland, the City of Casey, Downer and Winslow Constructors Australia.

“Downer has invested heavily over the past 10 years to create economic, social and environmental benefits for our customers and their communities by pulling products and not pushing waste,” said Downer’s General Manager Pavements, Stuart Billing. “We’re proud to be partnering with Stockland again and the latest project at Evergreen, which will see yet another community use materials in their roads that would otherwise go to landfill.”

Located approximately 59 km south-east of the Melbourne CBD, Stockland Evergreen is planned to support a residential community of approximately 1500 families, providing proximity to existing shops, schools and childcare in the local Clyde and Cranbourne areas. The community also has a connection to the Peninsula and Monash freeways, the Mornington Peninsula golf courses, off-road walking and riding paths, as well as the planned future Clyde Regional Park and Sporting Precinct.

“Reconophalt is one of many projects we will be introducing at Stockland Evergreen to ensure we’re being as kind to the environment as possible while also setting up our families for a bright future,” said Stockland Project Director Kerry Balci.

“The new community will also feature shadeways on the main thoroughfares to absorb and reduce heat retained by the pavement, and drainage reserves throughout the community will be used to store and reuse drain water. We’re also encouraging residents to install cool roofs in their homes to improve natural heating and cooling in their homes.

“We continue to see growing demand for residents to create their future home in the booming area of Clyde. We’re looking forward to providing our future residents with a variety of different lifestyle options to grow in a community that is carefully designed to meet their needs.”