Your future workplace will be as smart as you are 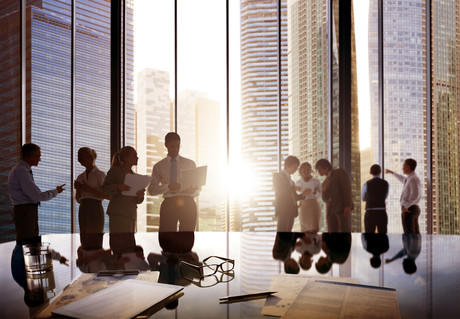 Watch any modern spy movie and chances are there’s a scene where the hero infiltrates an ultramodern office tower, manipulating biometric security scanners before hacking a terminal in a server room, which triggers an alarm and program to evacuate all the air from the room. Yes, your heart is racing just thinking about it.

The reality is, these buildings exist, but thankfully, their automated systems are far more benevolent than anything a Hollywood scriptwriter could come up with.

Say hello to the smart building and future workplace.

While the word ‘smart’ is thrown around with wild abandon these days, an easier way to think of it is as a ‘connected and automated’ building; one in which everyday functions — such as security, lighting and air conditioning control — are handled through a central gateway integrating multiple systems that monitor a collection of networked sensors that can trigger automated actions based on the data they obtain. For example, if the building detects a meeting room is vacant, it will shut off or lower the lighting, and the heating or cooling.

“It’s no longer just words and hype,” said Mark Blum, Co-Founder and CEO of Cognian Technologies. “In the IT space, computers in buildings have been connected for quite some time. But in the building operational space — it’s now really starting to happen.

“Primarily, though, this has been happening in buildings at the top end of town; that’s where a lot of the innovation is happening. What we’re doing at Cognian is, we want to democratise the industry so it’s not just large buildings that are smart, it’s all buildings.”

To that end, the team at Cognian have developed Synchromesh Wireless — a wireless IP ‘backbone’, built on Schneider Electrics’ open, IoT enabled EcoStruxure platform, which connects all building services into a central control system.

“What we’re doing is figuring out ways to use mandatory infrastructure that can then offer more smart features and productive workplaces,” said Gavin McClelland, Digital Buildings National Offer Manager with Schneider Electric.

“We can aggregate the data from connected machines or sensors and offer various Advisor packages that are applications which offer insights and enhanced management from the cloud, so a tenant or facility manager can control the building from anywhere you have phone or internet access.

“What we are seeing are self-learning buildings. They are fitted out with devices that are producing data that is analysed by software applications which then deliver automated outcomes to give occupants or owners a better experience and make the buildings more efficient in their day-to-day running.

“We now have cheap-to-install wireless monitors that can collect data down at the individual workstation level rather than up at the more ambiguous ‘whole floor’ level. This enables applications to then provide three services — occupancy analytics, wellbeing analytics and geolocation wayfinding. This information is now available to parts of the organisation that normally haven’t accessed or been offered data — that is, HR teams or workforce planning or even workplace designers,” McClelland said.

“People and the workforce infrastructure are the biggest cost for many businesses and workplaces. For example, the cost of each workstation per year in a Class A building can range across $10–25K. So, if you have more workstations than you need it’s not an efficient spend. For the first time organisations can gain data on workstation use — how often, what days, what time of the day and movements around the station. Plus, the CO2 levels, temperature and humidity at the workstation, which are important wellbeing factors.”

When early designs for Syncromesh attracted government eyes, a federal government accelerator grant for $1 million followed. It has since grown into an easily implemented and scalable system, appearing in smart buildings around the world.

“It has to be simple,” Blum said. “Simple to install, simple to configure, no troubles in maintenance — those factors are designed into both the way we handle wireless connections, to the way we configure and set it up. We make it very, very easy.

“There are wireless technologies out there that can service a small area, but really what you want is something that is ubiquitous and just works. Synchromesh is designed to scale up to entire floors and entire buildings.”

Far from offering mere functional features, a smart building also has the ability to not just enhance employee wellbeing, but also reduce its carbon footprint. International Energy Agency research shows that the combined buildings and buildings construction sectors are responsible for 36% of global final energy consumption and nearly 40% of total direct and indirect CO2 emissions. Digitalisation of buildings is a critical element to overcoming this significant issue for owners and the community.

This was a pivotal concept when Schneider Electric technology played a large role in the design of The Edge in Amsterdam. Dubbed the ‘smartest building in the world’, The Edge is a net zero-energy building — it generates more solar power than it uses — and features functions to enhance employee wellbeing. The building can recognise your car when you drive up and direct you to a parking spot and then set your preferred room temperature and lighting as you enter the meeting room it has booked for you.

“Human beings weren’t designed to live indoors,” Blum said. “But we spend most of our waking hours in these buildings. Our bodies are attuned to natural light rhythms, but we’re subjected to non-natural lighting.

“By tracking movement and producing heat maps of where people are, you make sure that you’re only cooling, heating and ventilating where people are, not where it’s empty, and adjusting lighting to make the built environment match our circadian rhythms — the better we feel, the better our mood. Wellness, energy and utilities for the people within, it happens through connectedness.

“Our vision is to make every building a smart building,” Blum said. “It’s not just about the top, shiny glass, grade-A buildings; it’s about every building. It’s about creating an IoT, scalable system that will grow in the future.”

Thankfully, building designers are now combining simple use OT (operational technology) with IT to create a smart system that connects and exists between the two. That said, we’re still in the very early days of this growth, which some would say is the most opportune time to design and create the workplace of the future.

“If you’re a tenant, a building owner or a developer, you need to be really careful about the fit-out you’re doing,” McClelland said.

“You need to ensure it’s not going to get ripped out and replaced in a couple of years. If you’re smart you can futureproof your asset for many years to come — through your IP backbone, down to the types of sensors you install now.”

For the team at Cognian, the growth of Synchromesh throughout the world will improve workplaces to nurture happier, healthier and more productive employees.

At Schneider Electric, Gavin McClelland said the smart building team is focusing on educating developers, architects, system integrators and contractors on what out-of-the-box technology is on offer today, so their mindset is focused on developing Australia’s and New Zealand’s next generation of smart workplaces.