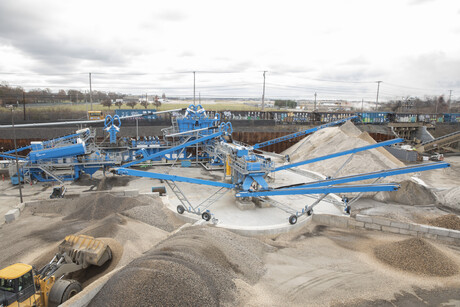 Following extreme weather conditions across Australia, Daniel Webber, Business Development Manager at CDE, explains the reality of climate change and how it threatens to unearth the history of Australia’s soil contamination, highlighting the remediation solutions that can remove toxins from the environment around us.

In the summer of 2019/2020, Australia faced devastation from harsh weather conditions, experiencing some of the worst bushfires on record, extreme dust storms across New South Wales, flash flooding in Queensland and long periods of drought.

Every day we are living with the reality of climate change and witnessing its impact on our environment — and without stark intervention, the consequences of global warming on our climate will be felt for decades to come.

Indeed, the Intergovernmental Panel on Climate Change (IPCC) reported temperatures could rise by 1.7°C by the end of 2100 and sea levels could continue to rise globally.

Daniel Webber, Business Development Manager at CDE Global, explained the delicate balance that exists between climate and our soil, revealing that the rate of change is having a profoundly negative impact on soil contamination levels.

“Contaminated soils are a key contributor to hazardous waste in Australia, yet the full extent of soil contamination is not yet fully known.”

Webber said this is due to variants in reporting between districts and a lack of historical reporting.

The Cooperative Research Centre for Contamination Assessment and Remediation of the Environment (CRC CARE) reports over 160,000 contaminated sites nationally. Of these, it’s estimated that less than 10% have been remediated.

“Australian soil has been contaminated with conventional and emerging contaminants for decades,” Webber continued, “including heavy metals, hydrocarbons, organic matter and man-made chemicals.”

“These weather patterns are having devastating effects on our soils and will unearth years of historical contamination.”

Research has shown the long-term effects of climate change, with increasing floods and drought conditions facilitating the movement of soil-based contaminants and soil erosion.

A study by CRC CARE published in Soil Systems found soil erosion at a rate of 70–300 tonnes per hectare (tph), compared with what were defined as typical losses in the region of 60–80 tph.

According to Webber, our changing weather is causing the level of soil erosion to increase and dust storms will accelerate the spread of toxic pollutants in exposed soil.

One such consequence of climate change is the prevalence of dust storms, which, according to data from DustWatch, are occurring more frequently.

The movement of contaminants in dust storms presents huge health and environmental risks, as pollutants enter the air and water before finally settling into the soil again.

Many contaminants such as lead, mercury and arsenic can enter the food chain and be ingested by humans, and with dust storms there are even more risks from breathing in harmful toxins.

“Exposure to toxic contaminants can have a devastating impact on our health so we must find ways to diminish the risk,” Webber urged.

“Many argue contaminated soil sites surrounding our waterways and agriculture lands are those which urgently require remediation. Our peers in the waste industry and local government are determined to clean up years of contamination and have already successfully remediated inorganic and organic materials.

“Yet we cannot do this alone, we need more to join us as we try to make Australia’s soils safe again.”

Successes have been reported. For example, the paper Soil: Formation and Erosion, published by Australia State of the Environment 2016, stated that soil erosion rates were equal to soil formation rates. However, it remains to be seen how recent and unprecedented bushfires will affect this ratio, or by how much it will set remediation efforts back.

Outlining how CDE’s bespoke soil washing solutions can support this effort, Webber said, “Our technologies utilise a suite of mechanical, chemical and biological processes for recovering washed solids such as sand and aggregates. Contaminants are transferred into the water phase, which are effectively treated to produce recycled water for re-use within the process.

“CDE’s bespoke solutions can be tailored based on tonnage and level of contaminants to ensure maximum efficiency within every project we deliver.

“Our systems provide savings on landfill charges, prevent extra investment in waste storage equipment and introduce new materials for re-use. We can no longer ignore soil contamination — we must utilise remediation technology to help us eliminate potential risk to human health and to protect the world around us.”

Heritage retention works are an excellent example of how we can create a circular economy with...

When it comes to sustainability terms and climate change, there are numerous 'buzzwords'...