The University of South Australia has teamed up with China’s Tianjin University in developing the new China-Australia Research Centre for Sustainable Urban Development (CAC_SUD) to address the challenges and opportunities surrounding urban growth in the 21st century.

When Australia’s chief scientist, Professor Ian Chubb, recently launched his National Research Investment Plan, he said: “The most pressing concerns for Australian researchers were responding to a changing planet and the challenges of the Asian Century,” and “… we need to be in there right now seeking solutions to some of these challenges.”

The China-Australia Centre for Sustainable Urban Development at the University of South Australia (UniSA) has been developed to find just those solutions. The centre is part of a strategy to develop close research and educational links with top universities and municipalities in China, with a view to establishing a sustainable engagement for UniSA in a country that is becoming increasingly important in science, technology and design. 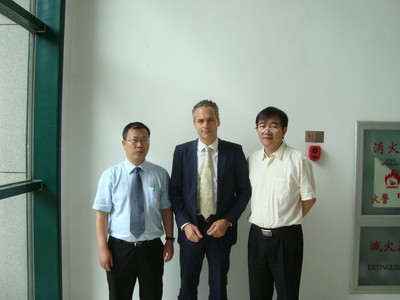 The Asia-Pacific region has seen rapid growth on an unprecedented scale, drawing focus to a region that is ambitious for economic advancement. China has a strong awareness of sustainability issues and a willingness to address these issues. With China’s transformation to a knowledge-based society, the global centre of gravity has started to shift to the Asia-Pacific region. Australia is no longer orientated towards Britain and Europe as it was in the earlier part of the last century. In the 21st century, Australia’s relationship with Asia is characterised by an openness to integrate with the region, which has accelerated over the past four decades and laid the foundation for Australians to benefit from the opportunities stemming from the region. There has been a surge in resource demand, rapid urbanisation and rising middle class in Asia. As China’s middle class increases, so too does their disposable income and consumption levels.

The Australian Government’s Australia in the Asian Century White Paper’s national objectives include that Australia will have to work harder to make deeper and broader ‘people-to-people’ links, which will include the substantial flows of people and ideas between institutions, such as educational institutions, business and community groups and the public service. Australia’s links within the region are crucial to the country’s international reputation and relations and “… the range of actors influencing the international agenda has proliferated to include business, the media, think tanks, cultural and educational institutions, community groups and individuals.”

Urbanisation in Asian societies involves hundreds of millions of people - many times the number of Australia’s current population. The scale and pace of urban growth in China is a defining feature for many countries in the 21st century, with profound implications for people everywhere. It will be crucial that the Asia-Pacific region adopts a sustainable approach to city development as it transforms and develops its urban growth.

Cities in the Asia-Pacific will need to be kept dynamic, inclusive, complex and vibrant, but also healthy and resilient, ensuring wellbeing of their urban citizens, democratic participation processes of their residents and sustainable flows; these flows need to go beyond flow of data and money to include the sustainable flow of resources, materials, energy, transport, water, biodiversity, nutrients and food - cycling energy and material (waste) flows.

This goes far beyond the conventional thinking of aesthetics and functional city form; it is about the longer-term sustainability of urban settlements. Instead of becoming more unsustainable, existing cities will need to be transformed in an intelligent way, district by district, towards low-carbon urban precincts. In this way we can increase the urban resilience and durability of cities against environmental factors such as increasing temperatures, heat stress and other extreme weather events, such as urban flooding.

For forward-looking academics it is essential to engage in the region and think beyond mere low value-adding commodity exports. There are dangers from growing pollution and greenhouse gas emissions; with ever-growing energy consumption, China now accounts for over a quarter of all global greenhouse gas emissions. Innovation and expertise in sustainable processes have become more important than ever for Australia in finding avenues through which to engage with the Asia-Pacific region.

Tianjin University - ranked in the top 1% in the country - is in Tianjin, a city of 12 million people located around 30 minutes by high-speed rail from Beijing, and which the Chinese Government identifies as a science ‘cluster’ city. There is a strong synergy and overlay between both universities cooperating through the China-Australia Centre for Sustainable Urban Development.

The aim of the centre is to build a world-class multidisciplinary research-intensive centre, focusing on sustainable urban development. It explores strategies to enhance urban sustainability practices and policies in China, Australia and other cities in the Asia-Pacific region. Leading experts and practitioners in urban sustainability will engage governments, businesses and other experts to help solve challenges such as how municipalities can better incorporate urban sustainability into their strategic plans. The success of urbanisation in the Asia-Pacific will be critical to its economic and social development.

Governments and municipalities in the Asia-Pacific will need to develop better incentives for people to take action to protect our ecosystems, which we risk destroying if we follow the consumption patterns of the last two decades. This is particularly interesting with regard to China’s increasing role as consumer and Australia’s as provider of natural resources. In general, there are two solutions for this: see the necessity to change ahead of time and adapt by making changes; or don’t make the changes and be finally forced to anyway.

Technology must always be embedded into a societal framework to be effective. The collaboration signifies the universities’ commitment to furthering China’s socially sustainable urban growth and to local contributions that tackle global issues. The role of technology alone is hereby limited. While technological innovation has served to reduce the impact of some long-term problems - for instance, new technologies have dramatically increased harvests and improved access to education - technology doesn’t invent itself and these achievements are always the result of decades of hard work and investment in research programs.

The aim is also to scale up technologies, from the building level to low-carbon precincts, and potentially to influence urbanisation activity in our Asian neighbourhood. The biggest opportunity for emission reductions is in cities and buildings. Some of the biggest challenges are to understand what drives human behaviour and bottom-up changes - behaviour change to reduce consumption and mobilise shifts in consumption patterns.

A growing proportion of global scientific research is taking place in Asia; countries in the region have world-class research infrastructure and capabilities and the scope for mutually beneficial research is considerable. China has more researchers than any other country and partnerships with research and technology communities are crucial to supporting Australia’s ability to access new ideas and to build our future competitiveness.

The interdisciplinary research program of the centre focuses on the current state and the transformative potential of cities in the Asia-Pacific region. The centre investigates the systemic design and engineering challenges and potentials of the urban environment in the 21st century.

The centre fosters the exchange of academic staff and students, joint research projects and the joint supervision of PhD students, and provides consultancy services to industry and government. Research areas that relate to urbanisation include: sustainable buildings, urban ecology, public space, urban heat stress and the impacts of climate change. Research projects underway include the use of timber for better high-rise infill developments; zero waste construction using prefabrication; and exploring urban heat island mitigation strategies for cities in China and Australia.

Architecture, urbanism, environmental engineering, ecology and landscape architecture are some of the most potent disciplines available to us to remake our cities as dynamic, meaningful and sustainable cultural artefacts. The centre aspires to be a living laboratory for urban exploration, influenced by the geographical, cultural and historical position in relation to the Asia-Pacific region.

An urban sustainability training program to be launched at the centre in 2013 will offer intensive training in Australia and China, and aims to provide practical knowledge to Chinese municipal leaders on enhancing sustainability efforts. The China-Australia Symposium on Sustainable Urbanisation will be held in Adelaide In February.

*Steffen Lehmann is Professor of Sustainable Design at the University of South Australia and director of the China–Australia Centre for Sustainable Urban Development.

Australian researchers have developed a way of capturing carbon dioxide and converting it to...

Rural care — where to now?