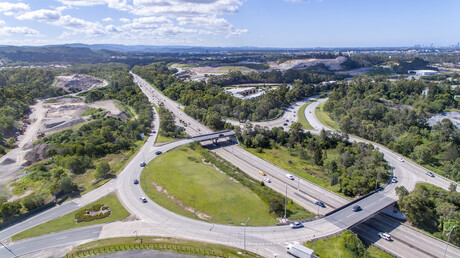 Integration of sustainable design and construction methodologies has achieved the Queensland Department of Transport and Main Roads’ (TMR) first ‘Leading’ IS Design Rating for a road project.

The Pacific Motorway (M1) is a vital transport link between Queensland and the southern states, carrying interstate freight, tourist and commuter traffic. The 10 km section of the motorway between Varsity Lakes (Exit 85) and Tugun (Exit 95), known as VL2T, currently carries around 90,000 vehicles each day and is frequently congested during both weekday and weekend peak periods. Traffic demand for this section of motorway is growing and by 2026 is expected to exceed 100,000 vehicles each day. The Australian and Queensland Governments have been progressively upgrading the M1 in line with the Pacific Motorway Nerang to Tugun Masterplan with this section being one of the highest priorities.

TMR awarded SMEC the design contract for the Varsity Lakes to Burleigh (VL2B) section including Burleigh Interchange (Exit 87). This two-kilometre section of the M1 upgrade included widening the motorway to a minimum of three lanes in both directions and upgrading Exit 87 to the Gold Coast’s first Diverging Diamond Interchange.

With a commitment to sustainable infrastructure development, the SMEC team worked collaboratively with TMR to ensure sustainable practices were embedded within the project. SMEC undertook the preliminary and detailed design with consideration of two key principles.

“These sustainability initiatives enabled the VL2B project to be awarded a ‘Leading’ IS Design rating from ISC,” said Jo Davis, Manager – Environment QLD/NT, SMEC. “This is the first time a TMR road project has received the rating and this success was made possible by the integration of sustainable design and construction methodologies and collaboration between the SMEC team and TMR.”

Typically, during road upgrade projects, existing concrete road base and sub-base materials are removed and taken to landfill to be disposed of or, in some cases, sent to a recycling facility before the new road is then constructed. During the design process for the VL2T project, the team considered and analysed concrete fracturing methods which enabled existing materials to remain in situ with the goal of reducing the amount of waste removal on the project. 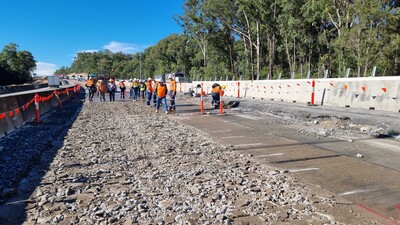 “The techniques we considered included pavement rubblisation and ‘crack and seat’,” said Pablo Balmaceda, Technical Principal – Pavements, SMEC. “Although these techniques had previously been utilised overseas, they were yet to be adopted in Australia.”

The project team trialled the process on sections of the corridor, confirming the feasibility of the fracturing processes, resulting in the practice being adopted across the VL2T project.

Utilising these techniques provides numerous benefits for the community and the environment. It led to the reduction of waste being sent to landfill and associated greenhouse gas emissions, a reduction in construction time and associated gas emissions, increased safety levels for the travelling public and it avoided the exposure of weaker sub-grades to elements such as inclement weather.

A road design sensitive to threatened species was a key aspect of the project. Two butterfly species were identified as being rare and vulnerable to this area of the Gold Coast — the Richmond Birdwing Butterfly and the Swordgrass Brown Butterfly. 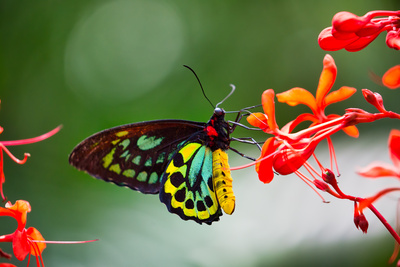 The Queensland Department of Environment and Science identified the decreased presence of the Richmond Birdwing Butterfly due to habitat loss and fragmentation, and that permanent populations of the species no longer exist in the Brisbane area. The Swordgrass Brown Butterfly, which was once common in the Gold Coast region, was almost extinct in Queensland and listed as vulnerable in New South Wales.

The project team sought to mitigate the threat to these species by targeting the remediation of habitat loss of threatened butterfly species through landscape design. Host plants were included in the landscape design to facilitate the reintroduction of these vulnerable species. Design for invertebrate habitat enhancement was assessed as an Australian first as part of the IS Design Rating submission and verified by ISC.

The reference design proposed the demolition of the existing Reedy Creek Flyover bridge to be replaced with a new two-lane bridge. SMEC reviewed the traffic modelling and determined a single lane would be sufficient to service the ramp metering upstream, and the change to lane requirements introduced the potential to utilise the existing bridge structure. However, there were concerns regarding cracking in the pier head stocks which had restricted the load capacity for the structure. SMEC’s material team sought to rehabilitate the existing bridge to significantly reduce construction costs and provide a sustainable outcome by reducing waste and the use of new materials.

The SMEC materials team undertook integrity inspections and analysis to determine the residual design life and load capacity, and determined the work required for rehabilitation of the structure. The carriageway alignment was redesigned for the M1 widening under the structure with the road barriers upgraded around the piers.

“The SMEC and TMR project team had the breadth of experience to challenge the design, and by utilising expert knowledge in SMEC’s material team, retained a major piece of infrastructure with a significant sustainability outcome and cost savings,” said Guy Porter Technical Principal – Roads and Highways Gold Coast.

Throughout the project, sustainable initiatives were integrated into design and construction methodologies by SMEC’s team. To ensure consistency across the entire project, with a commitment to sustainable infrastructure development, SMEC’s engineers and Infrastructure Sustainability Accredited Professionals (ISAPs) shared knowledge of design development of these first two packages with the other two design packages of the VL2T project.