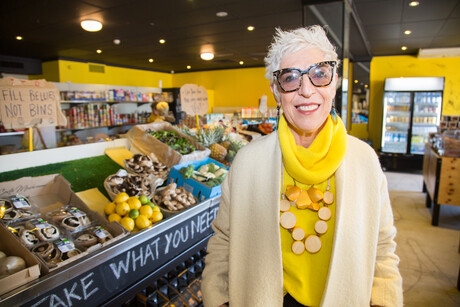 Before launching her food rescue organisation, OzHarvest CEO Ronni Kahn AO had a series of careers that spanned two countries and three decades. Then one day, she discovered her true purpose. In this interview with Laini Bennett*, Kahn provides insights into her journey of self-discovery and her leadership lessons learned.

When OzHarvest CEO Ronni Kahn AO was 23 years old, she was married, living on a kibbutz in Israel and looking for inspiration.

After finishing high school, she had followed her boyfriend to Israel to study for a year. Then, lacking direction, she followed him to the kibbutz. While she enjoyed the lifestyle, Kahn longed for a fulfilling career.

Unsure how to shift the status quo, but seeking a change, she and her sister visited a hair salon. Kahn says she walked into the salon with lanky long hair and walked out looking like she’d put her finger in an electricity socket.

“Whoosh! I had a big afro,” she laughs. The flattering new look had a dramatic impact on her confidence.

“Suddenly I walked differently, felt more gracious within myself — and people related to me so differently,” Kahn said. Overnight she became visible, and within a few weeks, she had a new role in the kibbutz’s accounts department.

While Kahn said the perm is a superficial lesson in self-confidence, her transformation was the beginning of a journey of self-discovery, one that she shares in her recently released biography, A Repurposed Life.

From your mouth to my ear

Kahn was born in apartheid South Africa, the youngest of three daughters. Growing up she was shy, afraid to voice her opinions and unable to value her own intellect.

While her parents were loving and supportive, they were also pragmatic. Life dealt them a blow when her architect father was in an accident that left him hospitalised for months, turning her mother from homemaker to breadwinner overnight. As a result, they wanted financial security for their girls, encouraging them into stable, reliable careers like nursery teaching. While her two sisters pursued this path, Kahn wanted to become an artist or an architect like her father. Her parents told her she lacked the talent.

“This is why what we say as a parent or as an adult, what we say as a leader, is so important, because it impacts every single person that listens to you, hears you, watches you,” Kahn said. “Your actions and your words need to always be in alignment.”

After two decades in Israel, Kahn and her family moved to Australia and started over once again. Her ability to build new lives and new careers — in different countries no less — culminated in the strength of character, street smarts and business nous later required to found OzHarvest and develop it into one of Australia’s leading food rescue organisations.

Indeed, Kahn’s position as OzHarvest CEO is the pinnacle of a series of roles she has held throughout her life, including farming, teaching, sales and retail, floristry, fashion design, interior design and event coordination.

Kahn says that ultimately, she needed to give herself permission to be who she wanted to be. “In a funny way, the perm was one of those triggers,” she said.

While running her events business in Sydney, Australia, Kahn became increasingly disturbed by the enormous amount of leftover food going to waste. One huge corporate event, in particular, saw entire food stations virtually untouched. She said this was the night that changed everything.

Kahn’s first step was to drop the food at local homeless shelters. However, it was a visit to South Africa in November 2003 that crystallised the future for her.

There, she learned that close family friend Selma Browde had been responsible for bringing electricity to Soweto, a black township. The fact that one person could have such a profound impact on so many lives sent a bolt of realisation through Kahn. Suddenly she understood that she, too, could make a difference. She’d found her purpose. A year later, OzHarvest was born.

Approaching 17 years since its foundation, OzHarvest’s distinctive yellow vans with their ‘Nourish our Country’ logo can now be seen across Australia, and sister branches have been established in the UK, South Africa and New Zealand. 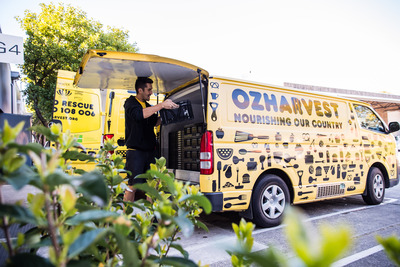 Once too shy to voice her own opinions, Kahn is a lead spokesperson on Australia’s food waste problem, regularly appearing in the media and in an advisory capacity to the government. She is a keynote speaker all over the world, inspiring people to find their own purpose.

Now a self-described silver vixen, Kahn no longer needs a perm to boost her confidence. Like the food that OzHarvest saves and repurposes, she has found her path and repurposed her life.

“I think we all have an ability to rewrite our story, and we sometimes just need one little success, one trigger, that can shift and change our path. We should never think that because we’re on one path that we can never change,” Kahn said. 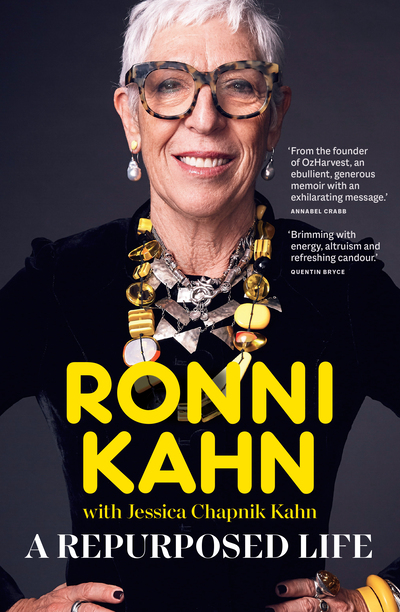 Read about Kahn’s life, her many adventures and journey of self-discovery in A Repurposed Life, by Ronni Kahn with Jessica Chapnik Kahn.