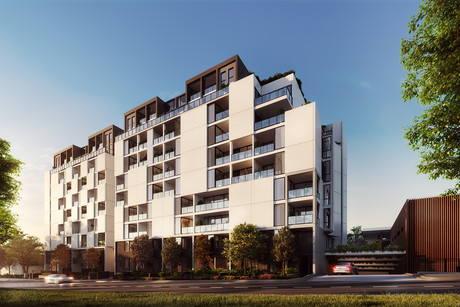 Real estate group Mirvac has unveiled its hotly anticipated plans for Marrick & Co, a residential development set to be located in the heart of the Sydney’s Inner West.

It all started back in 1990, when Marrickville Council (now Inner West Council) bought the site of the recently closed Marrickville Hospital. Council had always planned to turn the increasingly dilapidated site into a library and community hub, funded by the redevelopment of the remainder of the site into housing. It was not until 2012, however, after many years of community consultation, that a library design competition was held, with BVN Architecture emerging as the winner.

Three years later Mirvac came into the picture, proposing to develop over 220 apartments and terrace homes on the site. The group successfully won the tender to deliver both the housing project and the library, as well as the preservation and restoration of heritage buildings including the then 118-year-old hospital (as part of the library) and nurses’ quarters as part of the housing development. 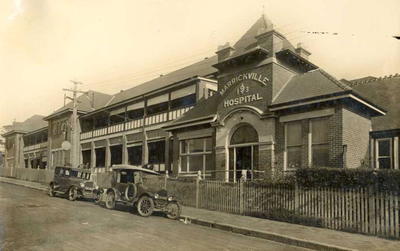 Marrick & Co, the proposed name for the new site, would serve as a multipurpose development, featuring the library and community hub, a variety of housing options (including nine affordable units for council), a public park, playground areas and more. The aesthetic was inspired by the industrial heritage of Marrickville along with the ‘pitched roof’ design of the future library, created by BVN. According to Ksenia Totoeva, from the design team at TZG Architects, the varied skyline creates a playful look which reflects the residential feel of Marrickville.

“The buildings have their own unique design aesthetic drawn from the diversity of building styles in Marrickville,” noted Tim Greer, owner of TZG Architects. “The facade features a series of chevrons which articulate the building by echoing the roof form of the surrounding buildings and library roof.

“When we designed the building, we deliberately set out not to design a perfect, seamless, perfectly controlled building,” continued Greer. “We wanted to make it out of a series of little buildings, if you like, with diverse elements. So part of the fun of the architecture was bringing these different motifs together.” 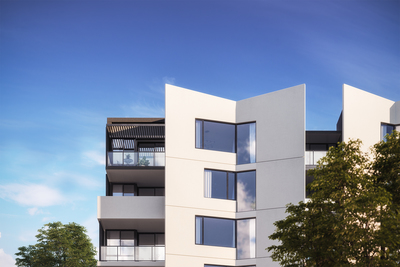 The other aspect the designers focused on, said Totoeva, was the use of outdoor space. The public park, for instance, will be a multifunction area that can utilised by council for events such as outdoor cinema screenings and market stalls. TZG and Mirvac even agreed to remove an entire building in order to create a brand new space called The Common — a tree-lined lawn area where the public and private domains overlap.

“Being at the centre of the site means that the buildings around the perimeter open on to a beautiful landscaped space, which is not only about enjoyment but also has a role to play in the collection of rainwater as part of the water filtration for the site,” said Greer.

“It’s very unusual for an apartment building, cos it has these really significant pieces of outdoor space that are passive and utterly recreational.” 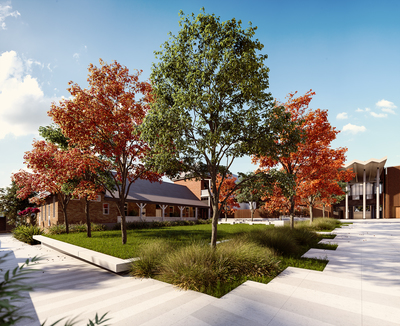 Residents will enjoy access to a shared street library, a community kitchen garden and tool shed, and a roof terrace with BBQ facilities. Other sustainability features will include electric vehicle charging facilities, a ‘green switch’ which turns off all appliances except the essentials, rainwater recycling and an entry wall made of recycled brick. The library, meanwhile, will feature FSC-certified white mahogany, skylights and natural ventilation, with a green wall outside to keep out noise and pollution.

“We’ve approached this almost like an ecologist, a renewal ecologist, approaches a damaged environment,” said Kim Bazeley, a senior architect at Mirvac Design. “We’ve taken the elements on the site, the public access, the framework of the library, the access to solar… and actually crafted a new habitat.” 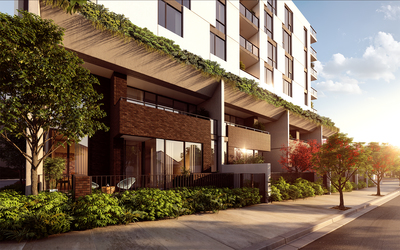 Marrick & Co is the first residential project in NSW, and the largest residential development of its type, to receive One Planet Living Community certification from Bioregional Australia. Incorporating principles such as culture and community as well as zero waste and sustainable water, One Planet Living is an international framework that helps people lead happy and healthy lives within the Earth’s finite resources.

“The future of our cities is in learning how to develop communities that have high living standards and quality of life, whilst at the same time prospering from the resource limits of our one and only planet,” said Suzette Jackson, executive director of Bioregional Australia. “Bioregional Australia Foundation is very excited by the commitment of Mirvac to this journey.”

With construction set to begin mid-2017 and completion expected in 2019, all those involved in the project agree that its success so far is down to one key factor: collaboration.

“The collaborative way in which both council and Mirvac have approached this project is a game changer for future development,” said Mirvac’s general manager of residential development NSW & major projects, Toby Long.

“The needs and wants of the community have been put first and foremost in the design and provision of both public and private amenity. This project reinforces Mirvac’s purpose to reimagine urban life.”

A more sustainable model based on a circular economic framework could ease financial recovery...

Waste management and resource recovery professionals will migrate online for this year's...

Water discovered on the sunlit surface of the Moon

ABB to help convert waste into sustainable energy in WA