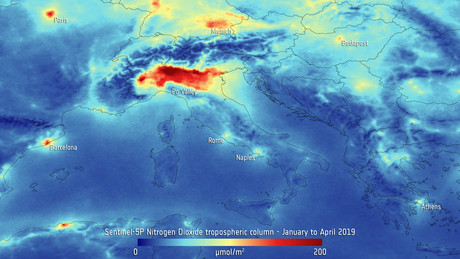 The coronavirus (COVID-19) pandemic that is currently gripping the world has already resulted in a vast number of changes to our way of life.

International and domestic movements have been curtailed by travel bans and the grounding of entire airline fleets, social distancing regulations are in full swing and many workplaces are moving to online and virtual spaces in the interests of preventing illness.

In the midst of all these limitations and changes, however, one positive aspect appears to be emerging — a drop in the amount of pollution around the globe.

From pictures of crystal clear water in the canals of Venice flooding the media, to reports of blue skies and improved air quality in some of the most pollution-choked parts of the world, the economic slowdown associated with COVID-19 has resulted in an improved earth — which clearly demonstrates how much human activity was affecting it in the first place. Hopefully, when things return to normal, this evidence will provide a powerful voice to encourage more sustainability initiatives in the future.

Pollution monitoring satellites from both NASA and the European Space Agency (ESA) have detected significant decreases in nitrogen dioxide (NO2) over China. The Copernicus Sentinel-5P satellite observed a decrease of fine particulate matter air pollutants during February 2020, when comparing data to the previous three years. By combining satellite observations with detailed computer models of the atmosphere, studies indicated a reduction of around 20–30% in surface particulate matter over large parts of China. The evidence would seem to indicate that this change is partly linked with the limitations placed on human activities following the outbreak of COVID-19.

According to ESA, nitrogen dioxide concentrations released by power plants, industrial facilities and vehicles in all major Chinese cities saw a steep drop between late-January and February 2020. The decrease in concentrations also coincided with Lunar New Year celebrations, which usually sees a similar drop in NO2 each year.

NASA said that although the Lunar New Year may have been a contributor, it is believed that the decrease is “more than simply a holiday effect or weather-related variation”. In a preliminary analysis, NASA researchers compared NO2 values detected by OMI (the Ozone Monitoring Instrument on NASA’s Aura satellite) in 2020 with the average amounts detected at this time of year from 2005–2019. In 2020, NO2 values in eastern and central China were 10–30% lower than what is normally observed for this time period.

“We can certainly attribute a part of the nitrogen dioxide concentration reduction to the impact of the coronavirus. We currently see around a 40% reduction over Chinese cities; however, these are just rough estimates, as weather also has an impact on emissions,” said Claus Zehner, ESA’s Copernicus Sentinel-5P mission manager, in a statement.

“We are conducting a detailed scientific analysis which will soon provide more insights and quantified results in the following weeks and months.”

In Italy — now considered the ‘epicentre’ of the COVID-19 outbreak — a similar drop in NO2 levels has been noted in data from the Copernicus Sentinel-5P satellite. According to ESA, the reduction is “particularly visible in northern Italy, which coincides with its nationwide lockdown to prevent the spread of the coronavirus”.

A video has been released by ESA which maps out the fluctuation of nitrogen dioxide concentrations across Europe between the dates 1 January 2020 and 11 March 2020. The animation uses a 10-day moving average, and demonstrates the remarkable reduction of pollution above the country during this time frame.

“The decline in nitrogen dioxide concentrations over the Po Valley in northern Italy is particularly evident,” Zehner said.

“Although there could be slight variations in the data due to cloud cover and changing weather, we are very confident that the reduction in concentrations that we can see coincides with the lockdown in Italy causing less traffic and industrial activities.”

With fewer cars on the roads, fewer planes in the air and fewer emissions from factories and other big polluters, it seems logical that the health of the planet is going to improve. The COVID-19 situation lends weight to the notion that humans can in fact change their behaviour to tackle issues such as climate change and reducing pollution, the destruction of the planet is not inevitable and it is possible for our actions to make a difference.

“Science tells us that [pandemics] like COVID-19 will occur with increasing frequency. So cleaning up the streets is a basic investment for a healthier future,” said European Public Health Alliance Acting Secretary General Sascha Marschang.

Does car ownership really give us freedom? According to University of South Australia urban...