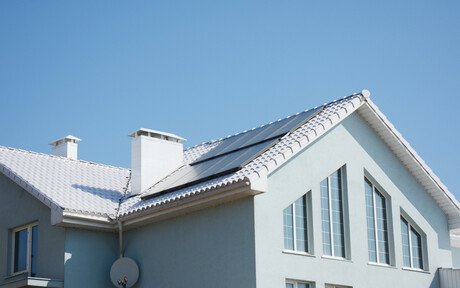 A cool roof is one that has been designed to reflect the sun’s light and temperature. Cool roofing can be achieved in a number of ways and ranges from simply repainting a roof with lighter colours up to installing a new roof with cool materials such as metals or woods. The UNSW analysis into these technologies was released a month after the NSW Planning Minister nixed a previous policy commitment to phase out dark roofs, which would have reduced urban heating and energy costs for new homes had it been adopted.

The UNSW cost-benefit analysis was part of a federally funded project to understand the applicability of using cool roof technology along with any barriers to its adoption.

“We used simulated climatic modelling to understand conditions with and without cool roofs. The results showed urban areas, including Western Sydney, Perth, Melbourne, Adelaide, Darwin and Brisbane, had the most to gain from cool roofs. The need for cool roofs and other heat mitigation technologies should really be a priority. If not, the cost of climatic change in the next 10 to 15 years will be tremendous.”

The study looked at 17 types of buildings of various use-types and heights, finding that energy consumption will decrease with cool roofing. The researchers also noted that indoor temperatures can increase in residential houses by up to 4°C if using cool roofs. Impressively, if Sydney replaced all its roofing with cool technology then energy consumption for cooling residential and commercial buildings would decrease by up to 40% in total. The buildings most likely to benefit from cool roofs are those with low insulation levels.

“During summer, a building in Western Sydney will require double the energy to cool down compared to the same building in eastern Sydney,” Santamouris said. “Western Sydney is especially at risk of urban overheating, meaning the low-income households are more likely to either spend more on cooling or are forced to endure heat-related stress indoors. It’s a very serious problem.”

Outdoor temperatures would benefit too, with possible reductions of 1.5°C to 2°C, which has the knock-on effect of making air conditioning more efficient.

“Another benefit to lower outdoor temperatures is that people will experience less thermal stress, meaning decreased mortalities and increased indoor safety and comfort during heatwaves. Cool roofs can reduce heat-related mortality by up to 25–30%. They will also help address energy poverty — an issue severely impacting the quality of life of low-income households.”

Despite the benefits of cool roofing, the study specified some barriers standing in the way of its widespread adoption. These include lack of legislation, policy support, accreditation standards and awareness. If these barriers are overcome, up to 150,000 jobs stand to be created through creation and installation of new roofs.

“The infrastructure is already here. Australia has 10 different companies producing cool materials and exporting them all over the world.

“There is vast data and evidence that cool roof technology works and it has been used extensively in the last 15–20 years overseas.

“More than 250 cool roof technology projects around the world have succeeded in decreasing city average air temperatures by 2.5°C to 4°C. And there are new technologies in development that will be able to decrease by 5°C.”

The analysis on the use of cool roof technologies is available from the UNSW website.

Safer solid-state batteries may be on the horizon

Deakin University researchers have developed a non-flammable electrolyte material for use in...