AI: the secret to smart cities 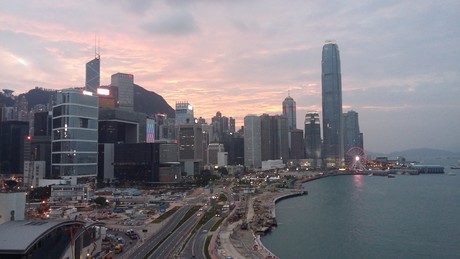 Artificial intelligence (AI) is proving a key enabler of smart cities, with new sensing technologies designed to provide citizens with a safe and smooth experience as they go about their everyday lives.

That’s according to expert speakers at the 2018 Hong Kong Electronics Fair (Autumn Edition), organised by the Hong Kong Trade Development Council (HKTDC) and held from 13–16 October in conjunction with electronicAsia, making it a massive week for members of the electronics and technology industries.

The last day of the event opened with the final session in the three-part Symposium on Innovation & Technology, exploring the theme ‘Technologies & Success Applications in an Age of AI’ — with a particular focus on smart cities. Unfortunately, the symposium was delayed for close to half an hour as speakers arrived late, following a significant signal failure on the train line during the morning rush hour — one that resulted in six hours of delays, and has since been deemed Hong Kong’s worst service breakdown ever.

The irony was not lost on speaker Mick Spiers, Vice President of Thales Revenue Collection Systems, who said that as the world’s population continues to grow, the need to get our cities moving again becomes ever more urgent. He noted that 50% of Earth’s 7 billion people currently live in cities — a number that will have increased to 70% of 9 billion people by 2050.

So how can cities combat increasing congestion? The key, said Spiers, is to use city infrastructure in more intelligent ways. Even ride-sharing services aren’t an overly efficient option, he said, with vehicles in many cases only accommodating the driver and their passenger — a passenger who might have previously opted to take public transport instead.

Spiers’ proposal, and that of Thales, is to implement ‘Mobility 4.0’, whereby multiple modes of transport work and connect together to better get people where they need to go, serviced by a single, intelligent transport planning app. Unlike apps which are specifically based around either public transport or ride sharing, this hypothetical ‘mobility-as-a-service’ app would include all possible modes of transport, planning the user’s trip based on their individual preferences (concerning price, speed, sustainability, etc) as well as real-time traffic information. As the app comes to learn its users’ travel patterns, it would also make recommendations based on past experience. The ultimate aim would be for the user to only need to pay a single fare, settled by a company such as Thales across all relevant transport operators, thus completing the seamless experience of the journey.

While mobility as a service is still in relatively early stages, there are other ways in which AI is helping to manage traffic on the roads, as noted by Herbert Jinsong Tang from Quanergy — a 3D LiDAR sensor and solution innovator. Using its core perception software platform, Qortex, Quanergy’s LiDAR sensors take information from the environment to provide what Tang calls “perfect 3D perception”. The sensors thus serve as a useful companion to street cameras, doing what they cannot — providing 3D shape information with high accuracy, orientation and integrity.

Quanergy’s LiDAR sensors have already been deployed in Australia, as part of a pilot study to reduce traffic congestion in Adelaide. Led by global technology company Cisco, the first phase of the pilot saw six sensors set up at the busy intersection of Grenfell and Pulteney Streets in the heart of Adelaide’s CBD. These sensors gathered intersection-approach traffic information, such as location and speed of vehicles as well as pedestrians. With this information, algorithms were tailored to recommend traffic light intervals, thus improving traffic and pedestrian-crossing flow.

With the trial now complete, Quanergy plans to deploy its sensors around Australia in Brisbane, Newcastle and Sydney, and eventually in Hong Kong. It’s the first step in a future that will include, according to Tang, smart street lighting, intersections, roundabouts, parking, tolling and more. This is in addition to smart safety monitoring, with Tang predicting that the sensors of the future will be able to detect jaywalking, wrong way driving, railway crossings and more.

Traffic management is also one of the services provided by NVIDIA AI Technology Center, as noted by the company’s General Manager, Samuel Lo. Deployed in the Chinese city of Shenzhen, NVIDIA’s AI technology undertakes real-time monitoring of intersections, then optimises the traffic lights based on the conditions.

But AI can also be used to keep our streets safe, said Lo, in the form of better surveillance technology. He noted that a smart car-shaped surveillance robot known as O-R3, produced by robotics company OTSAW, can be found patrolling the streets of Singapore.

Lo reiterated the fact that AI can work better than cameras, seeing through noise and better identifying people and objects — the analysis of security footage will therefore no longer be a solely human task. He gave the example of an escaped criminal who was caught last year after being observed by face-recognition cameras in the Chinese tourist town of Wuzhen — cameras which were initially set up to identify tourists staying in its hotels, using this data to enable entry through face scanner-equipped gates to the town’s various attractions.

In an even stranger example, face-recognition cameras in eastern China have this year caught three separate fugitives on three separate occasions — each one attending concerts for pop star Jacky Cheung. Over the course of April to May, the suspects were identified by cameras located at the ticket entrance to Cheung’s concerts, with alerts sent to the authorities within minutes. Each suspect was subsequently found and arrested before they could leave the concert venue, unable to hide among the tens of thousands of other attendees.

The role of AI in smart cities is clearly an important one, influencing everything from traffic management to security and maybe one day our transport habits. The crucial thing, then, is to ensure that AI is deployed in a way that is truly beneficial for cities and all their inhabitants. Only then, when we have smart governments using smart technologies to run smart cities, will we have smart citizens.