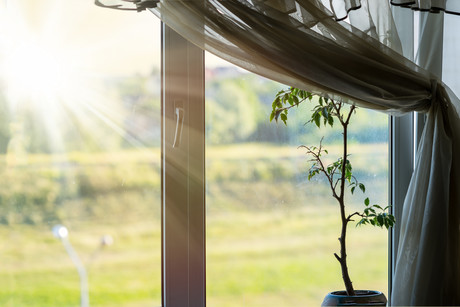 A window film made from a specially designed molecule has the potential to take the edge off the most intense midday heat by absorbing and storing solar energy for later, even distribution.

Researchers from Chalmers University of Technology, Sweden, have demonstrated that the molecule can capture energy from the sun’s rays and release it later as heat. The team’s findings are published in the journal Advanced Science.

On sunny summer days, heat radiates into homes or cars, creating an unpleasantly high indoor temperature. When the research team’s molecule is struck by the sun’s rays it captures photons and simultaneously changes form — it is isomerised. When the sun stops shining on the window film, the molecules release heat for up to eight hours after the sun has set.

“The aim is to create a pleasant indoor environment even when the sun is at its hottest, without consuming any energy or having to shut ourselves behind blinds. Why not make the most of the energy that we get free of charge instead of trying to fight it?” said chemist and research lead Kasper Moth-Poulsen.

At dawn, when the film has not absorbed any solar energy, it is yellow or orange because these colours are the opposite of blue and green, which is the light spectrum that the researchers have chosen to capture from the sun. When the molecule captures solar energy and is isomerised, it loses its colour, becoming entirely transparent. As long as the sun is shining on the film it captures energy, which means that not as much heat penetrates through the film into the room. At dusk, when there is less sunlight, heat starts to be released from the film and it gradually becomes yellow again and is ready to capture sunlight the following day.

“Airports and office complexes should be able to reduce their energy consumption while also creating a more pleasant climate with our film, since the current heating and cooling systems often do not keep up with rapid temperature fluctuations,” said Moth-Poulsen.

The molecule is part of a concept the research team calls MOST, which stands for Molecular Solar Thermal Storage. Previously the team presented an energy system for houses based on the same molecule. In that case — after the solar energy had been captured by the molecule — it could be stored for an extended period, such as from summer to winter, and then used to heat an entire house. The researchers realised they could shorten the time to heat release by optimising the molecule for a window film as well.

The research team is working on increasing the concentration of the molecule in the film while retaining the film’s properties, as well as reducing the cost of the molecule.

“The step to applying our film is so short that it could happen very soon. We are at a very exciting stage with MOST,” said Moth-Poulsen.

The research has been funded by the Australian Research Council, The Knut and Alice Wallenberg Foundation and the Swedish Foundation for Strategic Research.