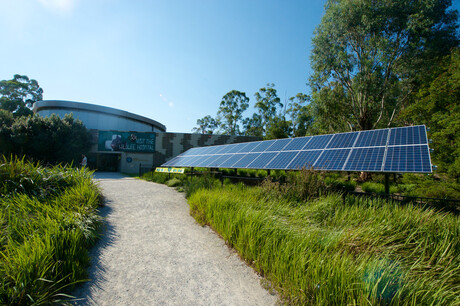 Victoria’s iconic zoos have become the first on mainland Australia to be powered by 100% renewable energy, thanks to funding from the Victorian Government.

Healesville Sanctuary is powered by renewable energy produced by the Crowlands Wind Farm near Ararat, while Melbourne Zoo and Werribee Open Range Zoo use 100% GreenPower. This builds on the 675 kW of onsite solar already installed at the three zoos.

Zoos Victoria CEO Dr Jenny Gray said she is hopeful the milestone will set a precedent for other Victorian organisations of a similar size and scale.

“Our purpose as a zoo-based conservation organisation is to ensure a future rich in wildlife,” Dr Gray said. “It is our duty to combat climate change by taking accountability for our own actions, energy consumption and embracing renewable energy.”

It’s not the first climate change milestone for Zoos Victoria, which has more than 800 employees working with over 5000 animals. Other sustainability achievements include becoming the first independently certified carbon neutral zoo in the world in 2013; reducing its greenhouse gas emissions from 14,000 tonnes to just 4000 tonnes; the diversion of 89% waste from landfill in 2020–21; and recycling 100 ML of water annually through an onsite water-recycling plant.

Zoos Victoria also partners with organisations to protect critical habitats and revegetation and restoration activities in key locations across Victoria. Through its Carbon Neutrality program, Zoos Victoria has invested carbon offsets that protect biodiversity hotspots across the world.

Zoos Victoria actively invests in influencing people to demand change and is inspiring wildlife-friendly actions among its millions of visitors, members and supporters. The community conservation campaign ‘When Balloons Fly, Seabirds Die’ — in partnership with Phillip Island Nature Parks — helped to inform the Victorian Government’s Environmental Protection Act, making the deliberate release of balloons outdoors illegal from 1 July this year.