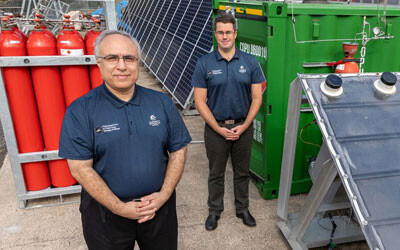 Low-cost green hydrogen has been manufactured using a combination of solar energy and water harvested from air.

Pioneered by University of Newcastle Professor Behdad Moghtaderi and his team, the technique overcomes some of the key challenges limiting domestic production and availability of hydrogen fuel.

The technology employs Moghtaderi’s Hydro Harvester — an innovation that ‘harvests’ pure water (H2O) from the air, then uses electrolysis (an electrical current generated from solar panels) — to split the pure water into hydrogen and oxygen before storing the hydrogen as a gas.

“By harvesting water from the air we aren’t placing added pressure on potable water supplies for drinking and household use, which in climates like ours is a long-term consideration for viability,” he said.

“Importantly, the water we produce via our Hydro Harvester technology is so pure it can be directly fed into the electrolyser, which is a huge advantage over other sources of water. Sea water, wastewater and even tap water require multiple treatment steps to reach the level of purity required in electrolysis. By removing the need for treatment, we can dramatically reduce hydrogen production cost.

“We’ve developed a scalable system. Our pilot plant demonstrator produces one kilo of hydrogen a day; however, a commercial-scale system could produce thousands of kilos per day.”

Moghtaderi and his industry partners are currently in discussions with an international car manufacturer to demonstrate his green hydrogen at one of their Sydney-based locations.

“We’re very excited to test our first-of-its-kind green hydrogen fuel in hydrogen cars. We’re hoping to commence testing by the end of the year,” he said.

“Hydrogen is such an attractive fuel because its only by-product after oxidation (eg, in a fuel cell or in an internal combustion engine) is water. It’s also the most abundant element in the universe — it makes up three-quarters of all mass on earth.”

Moghtaderi’s team has partnered with Southern Green Gas on the hydrogen innovation initiative and are also developing ways to combine their green hydrogen with carbon dioxide (also extracted from the air), as a ‘carrier’ or way to readily transport hydrogen.

“As part of an ARENA funded project, we’re combining carbon dioxide (CO2) with our green hydrogen to make renewable methane. This allows us to easily transport hydrogen over large distances using the existing natural gas pipelines. At the point of use green methane can be converted back to hydrogen or used as-is in households as a renewable form of natural gas,” Moghtaderi said.

The green methane technology will be demonstrated at a gas hub near Roma in Queensland, where it will produce approximately 620 kg of hydrogen per year, converting it into 74 gigajoules of methane that can then be injected into the existing network of natural gas pipelines across the East Coast gas grid.

“We’re leveraging Southern Green Gas and their partner APA Group’s expertise and energy infrastructure to transport green methane through existing infrastructure, which will significantly accelerate the adoption of this greener energy option. We expect to have this running by late next year,” Moghtaderi said.

He said the initiative was aimed at the decarbonisation of Australia’s existing gas infrastructure.

“At scale, renewable methane has the potential to be a significant source of Australia’s future natural gas requirements, and technologies like ours can help to realise this potential,” he said.

Doroodchi said the five-year program will generate new technologies locally and equip a workforce of industry-focused engineers with advanced skills for development and scaling up of hydrogen generation and transport.

“This ARC Training Centre for the Global Hydrogen Economy will unite Australian researchers and key industry players around the goal of accelerating the commercialisation of renewable hydrogen,” he said.

“Under this initiative we have a wide range of leaders coming together to support multiple key stages of establishing a hydrogen industry for Australia. Our team will lead research activities to support capacity building in hydrogen safety and novel hydrogen production methods,” Moghtaderi said.

Victoria Avenue Public School in Concord West has become one of the first schools in Sydney to...

Water discovered on the sunlit surface of the Moon

ABB to help convert waste into sustainable energy in WA