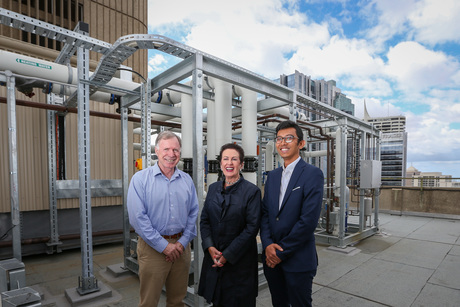 A low-carbon trigeneration plant is now powering, heating and cooling Sydney Town Hall and neighbouring Town Hall House. The plant has been gradually phased in over the last three months and is now fully supplying the City of Sydney’s civic buildings on working weekdays from 7 am to 10 pm.

Trigeneration is an efficient decentralised energy technology where electricity is made near where it is used, avoiding the need to bring electricity over long distances. Producing energy locally additionally helps avoid expensive upgrades to the electricity grid of poles and wires, which push up power prices. Furthermore, the technology produces less than half the carbon emissions of an equivalent coal-fired plant.

The City of Sydney received a grant of $3.05 million from the federal government’s Community Energy Efficiency Program for the trigeneration project, which was designed and installed by national building services contractor AE Smith. The plant uses seven 200 kW capstone micro-turbines that can each turn down to a tenth of their total power output, meaning they can follow the electrical demand in the building during both summer and winter months.

Lord Mayor Clover Moore said the system is expected to cut carbon emissions by more than 40,000 tonnes over its 30-year lifetime — equivalent to 1500 small cars.

“Installing trigeneration power at Town Hall is already helping us reduce our reliance on coal-generated energy hauled in from the Hunter Valley and allows us to power, heat and cool our buildings from a clean, local supply,” the Lord Mayor said.

“As well as meeting the weekday energy needs of Sydney Town Hall and Town Hall House, the rooftop generation plant is ready to export significant amounts of electricity to the grid. This could help manage peak power demands and defer costly investment in electricity network upgrades.”

The Lord Mayor said trigeneration is part of the City’s portfolio of sustainability programs to cut carbon emissions by 70% based on 2006 levels. Other programs include building retrofits for energy efficiency, installing solar panels on buildings and offsetting carbon emissions.