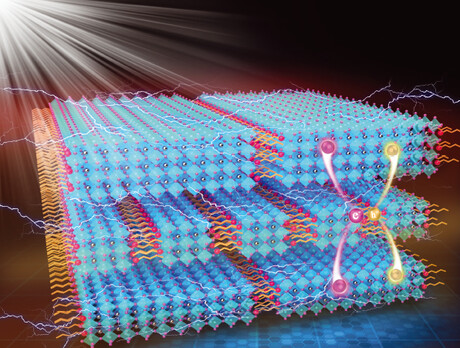 Australian researchers have demonstrated that the two-dimensional (2D) films used in some perovskite solar cells closely resemble a sandwich — two layers of the same type (the bread) surround one central, contrasting layer (the filling).

Perovskite is an exciting material at the forefront of solar energy research and design. Previously, scientists thought 2D perovskite films had a ‘gradient’ structure, in which certain components were found deep in the material, with other complementary elements only located nearer to the surface, like topping on a cracker.

The latest research — led by members of the ARC Centre of Excellence in Exciton Science based at the University of Melbourne, with collaborators at CSIRO and Shandong University — has been published in Journal of Materials Chemistry C.

The sandwich layout encourages excitons — quasiparticles important for converting sunlight to electricity — to move from the central layer to both surfaces of the film, while free carriers transport charge for collection by electrodes, resulting in more efficient solar energy generation when incorporated into devices.

“A real problem has been understanding what the structure of these 2D perovskite solar cells really is,” corresponding author Professor Ken Ghiggino said.

“There’s been quite a lot of controversy in the literature. The advance that we’ve achieved is to find out what the real structure of these films is and how they work in a solar cell.”

2D perovskite devices are of particular interest due to their superior stability and durability relative to ‘3D’ perovskite cells. Prototype 2D devices, developed by the researchers using infrastructure and expertise at CSIRO, have demonstrated 13% efficiency.

With greater fundamental understanding of the structure, the researchers will now attempt to increase device efficiency by changing the thickness of the layers within the perovskite ‘sandwich’.

Lead author Dr Fei Zheng said, “This is the first time a sandwich structure has been proposed versus the conventional gradient distribution model. We think this discovery will help design and device optimisation for higher performance of the 2D cells and LEDs.”

Australia Post has welcomed the first of 20 electric trucks to its national delivery fleet, with...

Standards Australia has published a revised solar standard with an aim to support users in...