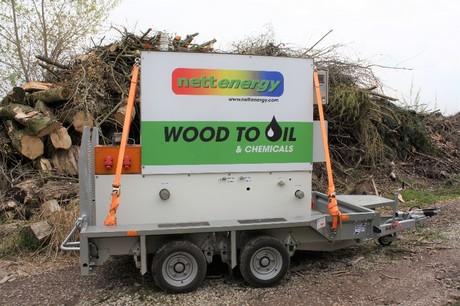 Australia’s agriculture sector is soon set to benefit from the arrival of a mobile biomass-to-bioenergy plant down under. Not only can the plant generate bioenergy at the biomass site in seconds, it can be used as a mobile bolt-on electricity plant that can potentially make agribusinesses completely independent of the grid.

A growing alternative to fossil fuels, bioenergy has the potential to be predominant in rural areas thanks to technologies than can convert biomass — woody waste and feedstocks — into biofuels, biochemicals, heat and electricity. The expense of transporting biomass to a high-cost off-site conversion plant, however, has been a deterrent for many Australian agribusinesses — until now.

The Mobile Pyrolysis Plant (MPP) uses fast pyrolysis technology — high-temperature, low-oxygen treatment of woody waste — to generate biofuels and biochemicals (such as bio-crude oil, wood gas, charcoal and wood vinegar) and electricity. The technology mimics nature’s process at high speed, producing bio-crude oil and its offsets in a similar way that the environment formed oil reserves over millions of years.

The MPP comes in two sizes and can be used by agribusinesses for bolt-on electricity generation. The 2-tonne version is transportable on a car trailer, while the 10-tonne size is collapsible, easily transportable on a truck and able to generate 1.2 MW of energy over a 12-hour process. This enables agribusinesses to power up machinery — and potentially their entire operations — independent of external energy sources.

Developed in the Netherlands by renewable energy technology manufacturer Nettenergy BV, the MPP will be distributed across Australasia by Pyrotech Energy, which also has the rights to manufacture and license the plant throughout the region. With a high thermal energy output yet very low emissions, it is claimed to reduce carbon dioxide emissions from biomass by up to 85%.

“Farmers, forestries, waste collectors, municipalities [and] water treatment facilities can use the bio-crude (pyrolysis) oil in boilers, furnaces, kilns or turbines to create heat and electricity. When connected to their grid, they can supply their operations with 50–250 kW of electricity per hour, depending the project and the application.”

Australia Post has welcomed the first of 20 electric trucks to its national delivery fleet, with...

Standards Australia has published a revised solar standard with an aim to support users in...