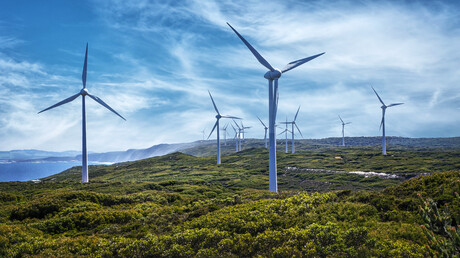 A pair of researchers from the Carnegie Institution for Science has been investigating how wind farms can maximise the amount of energy extracted from wind.

Specifically, the researchers — Enrico Antonini and Ken Caldeira — have been studying how large a wind farm can be before its generation capability per unit of land reaches the limits of energy replenishment, as well as how much of a ‘wind shadow’ large farms cast, which would have a negative effect on any neighbouring downwind installations. The findings are published in Proceedings of the National Academy of Sciences.

Turbines convert the wind’s kinetic energy into electrical energy as they turn. However, the very act of installing turbines affects our ability to harness the wind’s power. As a turbine engages with the wind, it affects it. One turbine’s extraction of energy from the wind influences the ability of its neighbours to do the same.

“Wind is never going to ‘run dry’ as an energy resource, but our ability to harvest it isn’t infinitely scalable either,” Antonini explained. “When wind turbines are clustered in large groups, their performance is diminished and the rate at which they extract energy is reduced.”

Caldeira added, “As we move away from fossil fuels, some scenarios predict wind farms could supply as much as one-third of global energy by 2050. So, it is imperative that we understand the relationship between turbine placement and maximum energy extraction.”

It takes time for wind to return to normal strength after some of its kinetic energy has been extracted by a wind farm. How quickly wind can recover from encountering a wind turbine is related to the wind farm’s latitude and the Earth’s rotation. Previous studies on wind power generation have noticed wakes behind large wind farms, so Antonini and Caldeira developed a theoretical understanding of the fundamental controls on the size of these wakes.

The size of a large wind farm’s wake is related the speed of the overlying winds, as well as to the amount of time it takes pressure differences in Earth’s atmosphere to replenish the energy that was extracted by the turbines. Antonini and Caldeira’s work indicates that these factors should be considered when determining the size and placement of wind farms under different conditions.

The authors suggested constructing multiple small wind farms with space for wind recovery in between, which may be a more effective strategy in some locations than building one massive wind farm, although more research is needed.

“We hope this work will enable the builders and managers of wind turbine installations to design the best possible scenario for maximum wind power generation,” Antonini said.