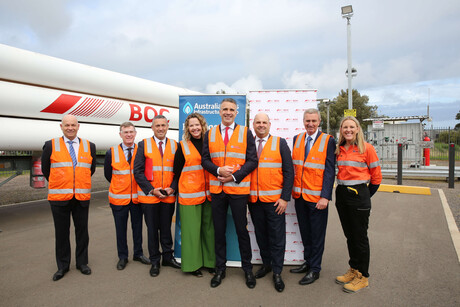 From this week, a custom tube trailer will collect shipments of up to 370 kg of the renewable gas from HyP SA’s plant at Tonsley Innovation District as part of a partnership between Australian Gas Networks — part of Australian Gas Infrastructure Group (AGIG) — and BOC, a Linde company.

The green hydrogen will be used in the production of high-purity argon supplied to the Whyalla steelworks and local industry. HyP SA can produce approximately 175 tonnes of hydrogen per annum and this is expected to be the first of many weekly deliveries to the Steel City.

The new Adelaide-based hydrogen supply chain will replace current deliveries to BOC’s South Australian customers from Victoria, eliminating the costs associated with 117,000 km in annual transport and saving approximately 122,000 kg of carbon emissions per year. Since May 2021, HyP SA has supplied up to 5% blended renewable gas to more than 700 homes in Mitchell Park. By the end of this year, it will supply more than 3000 homes in the surrounding suburbs.

AGIG aims to deliver at least 10% renewable gas across its distribution networks by 2030 and has set itself an ambitious target of 100% renewable gas conversion by 2040, and by no later than 2050.

HyP SA at Tonsley was the first of several renewable hydrogen projects AGIG is developing around Australia.

“Renewable hydrogen is a key part of our clean energy future, and this exciting project is helping businesses push the frontiers of renewable hydrogen. The real-life application of this facility reinforces widening community recognition of hydrogen’s benefits.”