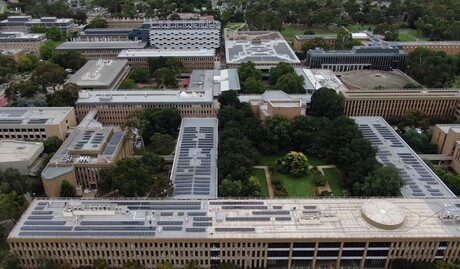 Melbourne’s La Trobe University is on track to achieve net zero carbon emissions by 2029 with the completion of a solar energy project at its Bundoora Campus.

The solar system features 7500 solar panels on roofs around the campus in Melbourne’s north, which will generate 2.5 MW of clean, renewable electricity. The project is a cornerstone of La Trobe’s Net Zero Plan to reach net zero carbon emissions by 2029 through renewable energy projects, energy efficiency improvements and waste reduction on campus.

“These panels will supply up to half of the campus’s energy needs on days of peak solar efficiency,” Professor Dewar said.

“Having the 7500 solar panel system installed across 25 buildings will reduce our carbon emissions by 4000 tonnes each year and is a major investment in our renewable energy future.”

Professor Dewar said that, as part of the net zero plan, 24,000 energy-efficient LED lights have been fitted in 100 buildings across La Trobe’s Bundoora, Bendigo, Shepparton, Mildura and Albury–Wodonga campuses. Regional campuses are already using power from a total of 3300 solar panels.

“These combined measures will reduce our carbon emissions by 15% this year and deliver financial savings through reducing our energy bills for the next 25 years,” Professor Dewar said.

La Trobe is internationally recognised for its commitment to making the world a better place, ranking fourth in The Times Higher Education Impact Rankings.

Victorian Minister for Energy, Environment and Climate Change and Minister for Solar Homes Lily D’Ambrosio said the project supports the state government’s own ambitious target of net zero by 2050.

“We know that if we are to meet our climate change targets then we will need to see renewable energy adopted across the Victorian economy,” she said.

“Today we are seeing wind and solar farms being built across our state and a strong supply chain delivering new jobs in renewable energy.

“Increasing solar capacity has been particularly important in the rapid growth of clean energy in Victoria, with solar generation increasing by 65% between 2018 and 2019 alone, and we will see continued growth through programs that promote both household and utility-scale solar.

“I’m so pleased to see La Trobe University taking bold action through both the net zero commitment and the installation of such a large solar array. It’s a clear demonstration of what is possible with leadership, clear targets and renewable energy technology.

“I know that the university and the broader community will benefit long into the future and I hope it sets and example for others to follow.”

Chemical engineers have made 'green' ammonia from air, water and renewable electricity,...