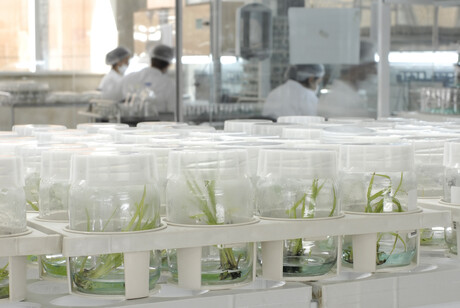 Researchers from the University of Queensland (UQ) have found a way to convert sugarcane into a building block for aviation fuel and other products.

A UQ team, in collaboration with the Technical University of Munich (TUM), has focused on a specific enzyme to speed up the slowest step in processing sugar into a chemical called isobutanol.

“Our research into this particular enzyme means we can accelerate the production rate and yield of isobutanol from sugarcane, ultimately enabling biomanufacturers to make diverse products at scale sustainably and efficiently,” Schenk said.

According to Schenk, the research used only a small number of a sugar acid-specific dehydratase enzyme as a production platform during the biomanufacturing process. The use of these sugar-converting enzymes, which operate outside of a cellular environment, meant that many of the pitfalls of more traditional cell-based biomanufacturing methods were bypassed, leading to higher yields of isobutanol with fewer unwanted side products.

Cell-based production of isobutanol from sugar created about 25 g/L of liquid cell culture, but in the UQ study, the cell-free method produced at least 10 times that amount.

“The cell-free method gives biomanufacturers more control and results in much higher yields, meaning a higher return on their investment and a more sustainably produced product — it’s a win-win,” Schenk said.

Developments in enzyme engineering and production have led to more enzymes being available for large-scale production of products such as aviation fuel, which had previously been unachievable.

“We’re only at the dawn of what is a very exciting age in this space,” Schenk said.

“While there have been commercial limitations to producing the enzymes, we now have enough evidence to show that large-scale manufacturing using the cell-free enzymes process is commercially viable and should play a major role in future biomanufacturing,” he said.