CSIRO and its industry partners plan to conduct a power-generation trial using Victorian brown coal processed into a slurry and injected into an adapted diesel engine. The direct injection carbon engine (DICE) aims to reduce emissions from brown-coal-generated electricity by 50% compared to current technology.

The technology converts coal or biomass into a water-based slurry that is directly injected into a large, specially adapted diesel engine. The fuel burns to produce intense temperature and pressure in the engine, which provides highly efficient power to turn electrical generators. The engine offers the potential of increased operational flexibility to support peak-load electricity demand and supply from intermittent renewable energy. 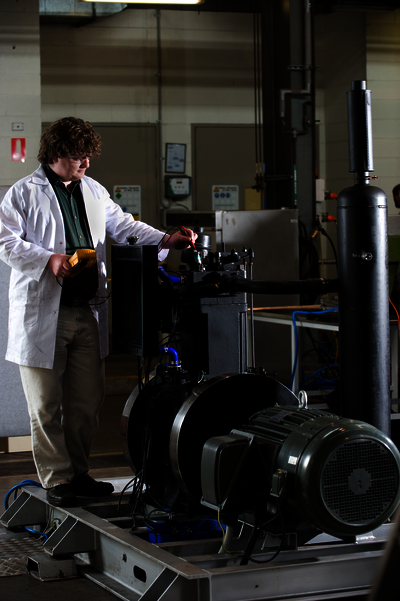 The direct injection carbon engine trial is designed to maximise the value and reduce emissions associated with the use of Australia's brown-coal resource. (Image: Murray McKean.)

Previous research in a laboratory-scale prototype engine proved that the lignite slurry can make a high-quality fuel. The partners now plan to trial the DICE in Victoria’s Latrobe Valley, the second largest and lowest-cost brown-coal resource in the world, to determine if the technology can deliver low-cost, low-emissions power generation from brown coal.

The project will then be conducted in a large-scale test engine. It will include a trial of 20 tonnes of micronised, refined carbon fuel from Victorian brown coal in a large stationary diesel engine, to be specially adapted in Japan by engine manufacturer MAN Diesel & Turbo.

Brown Coal Innovation Australia (BCIA) yesterday announced $1 million in funding for the technology trial, along with donations to four other R&D projects which will target improved efficiency and reduced carbon emissions from brown-coal power generation in Victoria and throughout the world.

BCIA Chief Executive Dr Phil Gurney acknowledged the latest report from the IPCC and its call for low-emission energy technologies. He said, “The projects we are announcing today will accelerate efforts to deliver sustainable energy from brown coal by reducing carbon emissions from coal-fired power and cutting the cost of carbon-capture technologies.”

“CSIRO is excited about the potential for DICE to lower power costs, halve carbon dioxide intensity and create a new export market for both brown and black coal,” he said