The University of Queensland 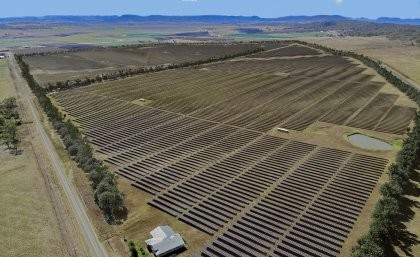 The University of Queensland (UQ) is set to become the first major university in the world to offset 100% of its electricity usage through its own renewable energy asset, with the establishment of a $125 million solar farm expected to enable energy neutrality by 2020.

“The 64 MW solar farm located just outside of Warwick, on Queensland’s Southern Downs, will provide research, teaching and engagement opportunities in addition to its environmental and financial benefits,” said UQ Vice-Chancellor and President Professor Peter Høj.

The proposed solar farm will generate about 154,000 MWh of clean energy each year — enough to power 27,000 average homes. This will more than offset UQ’s current and projected future annual electricity usage.

Construction is planned to start by the end of this year, directly creating more than 100 jobs, with an expected build time of 12 months. The cost of the project will be recouped within the life of the project through energy cost savings, with Professor Høj saying, “The solar farm will offset UQ’s current $22 million annual expenditure on grid electricity once it is fully operational in 2019.”

The project received development approval from Southern Downs Regional Council on 6 June and a formal connection agreement is now being finalised. UQ will take ownership of the project from renewable energy developer Terrain Solar once construction starts, and will own and operate the plant over its expected life.

Following construction, the site is expected to support six to seven ongoing full-time positions in operations and maintenance. The solar farm will also offer a range of further research and teaching opportunities, providing the potential to venture into emerging research and industry partnerships.

“Public engagement with the facility could be as varied as student field trips through to live data streaming that can be used for interactive market simulations,” said Professor Høj.

“In addition, UQ will install several electric vehicle ‘fast chargers’ and the site will include a visitors’ centre, helping to position the Southern Downs as a renewable energy hub.”

UQ already has more than seven years of experience managing large-scale solar PV assets of almost 50,000 solar panels at campuses in Brisbane and Gatton. This makes it the largest solar generator among Australian universities, according to Professor Høj.