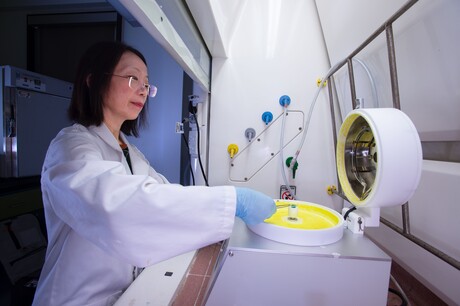 QUT researchers have used carbon dots from human hair waste sourced at a Brisbane barbershop to create a kind of ‘armour’ for solar technology. It has been shown that these carbon nanodots could be used to improve the performance of perovskites solar cells.

The research study, led by Professor Hongxia Wang in collaboration with Associate Professor Prashant Sonar  of QUT’s Centre for Materials Science, was published in the Journal of Materials Chemistry A.

Perovskites solar cells are a relatively new photovoltaic technology but are predicted to be able to create highly efficient solar electricity in coming years. They have already proven to be as effective in power conversion efficiency as the currently available monocrystalline silicon solar cells, but hurdles still to overcome include making the technology cheaper and more stable.

Unlike silicon cells, they are created with a compound that is easily manufactured, and as they are flexible they could be used in applications such as solar-powered clothing, backpacks that charge devices on the go and even tents that could serve as standalone power sources.

The QUT team used the carbon nanodots on perovskite solar cells out of curiosity, as they had previously found that nanostructured carbon materials could be used to improve a cell’s performance.

“It creates a kind of protective layer, a kind of armour,” Professor Wang said.

“It protects the perovskite material from moisture or other environmental factors, which can cause damage to the materials.”

Professor Wang has been researching advanced solar cells for about 20 years and working with perovskite cells since they were invented about a decade ago, with the primary objective of developing cost-effective, stable photovoltaics materials and devices to help solve the energy issue in the world.

The series uses temperature sensors for energy measurement and ultrasonic waves, with time...