Some solar a day keeps the bills at bay 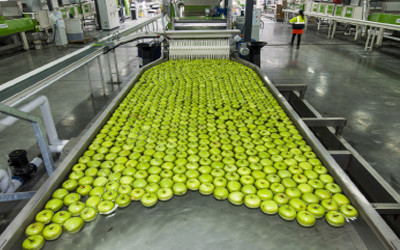 Victorian apple processor 9Mile Fresh has installed an extensive industrial solar power station to power its South East Gippsland facility in a move to combat spiralling energy bills. The renewable installation is hoped to cut onsite energy use by one-third.

The installation is one of several large MW-sized solar generators to be powered up over the past seven months to service large commercial and industrial businesses surrounding Melbourne. The project was financed by the Bank of Melbourne’s energy efficiency program, with support from the Clean Energy Finance Corporation.

The high-tech sorting, grading and packing system at 9Mile Fresh processes 150,000 kg of apples each day that are supplied by 50 growers across Victoria and Tasmania. The facility is claimed to be the largest of its kind in the Southern Hemisphere and one of the most sophisticated operations worldwide.

Apples glide through 51 separate channels of water as part of the grading and sorting system, a process that uses 5700 MWh each year; equivalent to the energy used by about 1000 typical Victorian homes.

Verdia CEO Paul Peters said the solar installation would provide clean, emissions-free electricity at a lower price than power sourced from the grid.

“The system will pay for itself in just under six years and then provide a third of on-site electricity for free,” Peters said.

“So, it stacks up financially. It will also help cut energy use by one-third and greenhouse gas emissions by 1600 tonnes each year, so there’s a large environmental benefit there too.

“Energy from the sun is helping to grow the apples and it’s now being harvested to sort and pack them off to the supermarket shelves throughout the east coast,” Peters said.

9Mile Fresh Director James Ryan said outsourcing the financial and technical management meant the business could remove much of the risk from delivering the program in house.

“Ultimately, it meant we could see the financial benefits sooner and hedge against future price shocks for a large portion of our electricity use,” Ryan said.

“We spend more than one million dollars on electricity, so it’s a significant outlay and an obvious area where we can be more efficient and reduce our operating costs. It is also becoming much more important for consumers and retailers to choose a product that has a lower environmental footprint. Reducing our energy use and emissions, and improving our sustainability helps achieve that.”

Cognian's Syncromesh is a wireless canopy that makes any building a smart building.