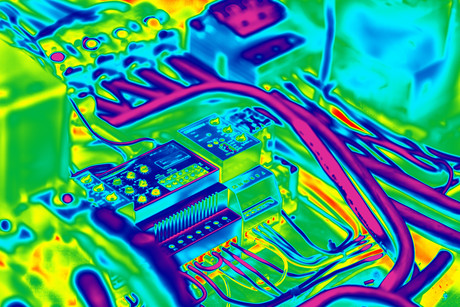 Thermocells are devices that convert environmental heat, such as that lost from the human body, into electricity via a thermal charging effect. Although inexpensive and efficient, thermocells have historically produced temperature-dependent low output voltages — just tens of millivolts (mV).

Researchers from the University of Tsukuba in Japan have now improved the energy-harvesting performance of thermocells, publishing findings in Scientific Reports.

The team developed a thermocell containing a material that exhibited a temperature-induced phase transition of its crystal structure. The teamʼs design, combining thermocell technology with an appropriately matched phase transition material, will increase the ability to harvest waste heat to power electronics.

“The temperature-induced phase transition of our material caused its volume to increase,” senior author Professor Yutaka Moritomo explained. “This in turn raised the output voltage of the thermocell.”

“Our results suggest that thermocell performance can be strongly boosted by including a material that exhibits a phase transition at a suitable temperature,” Prof Moritomo said.

“This concept is an attractive way to realise more efficient energy-harvesting devices.”