A new solar power purchasing agreement (PPA) has been launched in Western Australia, and it’s set to deliver long-term cost savings to households.

Developed by Yolk Property Group and Infinite Energy, in collaboration with the Department of Communities and Ventura Home Group, the PPA will be implemented via a pilot program at the newly launched Amble Estate in Girrawheen, which offers a mix of affordable and sustainable housing options including house and land packages, apartments and townhouses. It will be the first time a PPA has been rolled out at a green title residential development in Western Australia.

The PPA will see Infinite Energy take full ownership and maintenance of the solar system on each house. Residents then purchase daytime electricity generated by the solar system at a rate equating to 40% less than the Synergy A1 tariff. Any extra electricity the resident uses over and above what their solar system has produced is taken from the grid.

After 10 years, residents will have the option to take ownership of the solar system and, from that point on, will not pay anything for solar-generated electricity. The PPA ensures any power consumed by the household during the PPA period will always be 40% cheaper than traditional power supplied from the grid.

“This is not a marketing gimmick but a considered long-term solution to address rising household costs associated with the volatile power market,” said Yolk Property Group Director Tao Bourton. “Australians pay the highest rates for residential electricity in the world and this aims to remedy that with a model that can be rolled out nationally.”

Solar systems will be installed at no cost on all participating homes in the estate, offering protection from fluctuations in power prices for the length of the 10-year PPA. It could deliver households savings of up to $600 a year, equating to a saving of $6000 over the life of the agreement.

“The PPA allows residents to take advantage of significant savings on their solar electricity for an entire decade; after that, residents can take ownership of the solar equipment to enjoy free solar power for the life of the equipment, which is over 20 years,” continued Bourton. 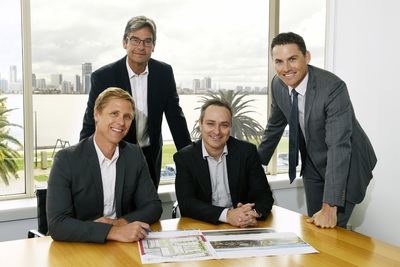 Bourton said the PPA is a coup for residents and developers alike, as purchasers are not required to pay for the installation and running of the solar technology and developers can customise the PPA to create a version that does not affect profits. He said it gives consumers the ability to easily reduce their carbon footprint, with homebuyers additionally having the option to integrate battery storage and an electric vehicle charger.

“This could be an absolute game changer — if all developments in Australia rolled it out, the reduction of carbon emissions would be immense. It would help Australia become a world leader in the uptake of renewable energy.”

Infinite Energy Managing Director Aidan Jenkins said his company has designed a model which is set to disrupt the residential solar industry across the country, allowing for a greater number of Australian households to access the benefits of solar energy without the upfront cost of installing a system.

“This pilot paves the way for solar PPAs to become the norm for millions of homes across the country, delivering cheaper and cleaner electricity — including to those that do not have the surplus cash to purchase a solar system,” he said.

It is hoped that the information gathered from the pilot will encourage the PPA to be rolled out across all future residential developments nationally, with a similar model then applied to existing dwellings. Bourton noted, “As with any untrialled new initiative it is not without risk, but we’re committed to pushing the boundaries of green development to find ways to make sustainability affordable and attractive for developers, government and purchasers.”

In addition to the PPA, a range of other affordability and sustainability initiatives not seen in any other residential estates will be implemented at The Amble Estate, with details to be released soon. Bioregional’s One Planet Living framework is being implemented at the estate to guide built form and land development, and aid in a holistic and long-term approach to sustainability.

To register for further information, go to www.theambleestate.com.au.

Top image caption: Illustration of The Amble Estate. Image for illustrative purposes only and may be subject to change.