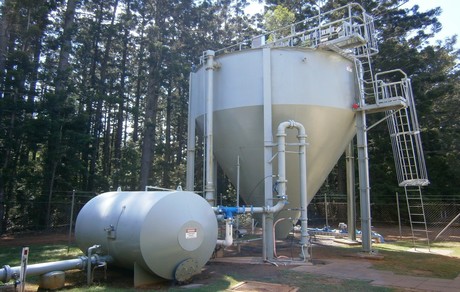 The Yarraman water scheme has always struggled with trihalomethane (THM) failures in its reticulation network. In 2014 a THM event continued for over 12 months with the standard response of lowering treated water turbidity, optimising processes, reticulation controls, and PAC addition not being able to effectively reduce the THM results below ADWG limits.

This event was eventually closed off after a second raw water source came online and an aeration system was installed in Reservoir 1.

With the expectation of ‘Health Based Targets’ tightening treated water turbidity limits and with THM exceedances continuing to come and go since 2014, a concerted effort has been made to understand what can be done to control THM production and determine a parameter that can be used to predict that THM production will not exceed the ADWG limits.

Total Organic Carbon (TOC) levels in the treated water are being used for that parameter. By monitoring TOC levels, operators can identify the effectiveness of coagulant adjustments, process changes, or raw water source selections and can be confident THM limits throughout the Yarraman reticulation network will be maintained.

Yarraman has a population of around 1300 people and an average day’s usage of 275 kl. Two main areas were identified as opportunities to improve the Yarraman treated water quality and potential of the treated water to form THMs.

The main one was the performance of the WTP itself. The Yarraman WTP consists of an upflow sludge blanket clarifier and pressure filter. Sludge blanket clarifiers are notorious for being finicky to operate and rely on a functional well developed sludge blanket to perform best. Another problem is that Yarraman is approximately 100 km from the operations base. The Yarraman operator also maintains a biofilter WWTP during their day in Yarraman. Therefore, the time the operator can spend at the WTP making adjustments and determining their effectiveness is extremely limited.

The second area of opportunity was that the first time that operators were made aware that THMs had exceeded the ADWG limit was when lab results were received — which could be three weeks after samples were collected. They therefore only knew if operational changes were effective three weeks after they were made. This would result in any THM incident extending for considerable time periods. The operators needed a reliable and early indication that THM limits may be getting close to limits.

It was found that turbidity can be used as the guide but does not provide the operator with confidence that THM production is under control — even when turbidity in the treated water is consistently below 0.3 NTU, THM levels in the reticulation can still exceed ADWG limits.

Built in 1980, the Yarraman WTP consists of an upflow sludge blanket clarifier followed by a pressure filter. It is designed to treat a maximum of 14 l/s. Sludge concentrations and levels in the clarifier were controlled by timers opening and closing a sludge drain valve to draw sludge from the sludge cone.

The treatment plant has two raw water sources. The original source, Ted Pukallus Weir, and the second from Boondooma Dam that came on line in 2014.

The treatment includes coagulation and powdered activated carbon (PAC), and uses sodium hypochlorite for pre- and post-disinfection. Pre-chlorination added before the filter is utilised for iron and manganese removal in the filter via the DMI-65 media. There is no ability for pH correction.

The Yarraman reticulation network has two pressure zones. Reservoir 1 at 680 kl (which also fulfils the clear water tank role) supplies the ‘low zone’ and a second reservoir of 820 kl supplies the ‘high zone’. Detention time of water in the network can be as high as six days.

Turbidity removal reliability was an issue, with limited opportunity for operators to be onsite at the WTP to make process changes and monitor their effectiveness.

On line analysers are installed and report directly to the SCADA system to assist with remote monitoring of the process. Full computer control was finalised in 2014 which allowed remote control of all dosing pumps, backwashing, sludge drain, and reservoir operating levels.

Filter turbidity breakthrough was a problem. This was mostly due to flocculent carry-over in the clarifier with the sludge blanket performing poorly and being hard to create and maintain with low raw water turbidity.

However even with the treated water turbidity averaging 0.16 NTU between January and March 2018, THM exceedances were still occurring.

An effective sludge blanket is seen as the most important part of a sludge blanket upflow clarifier. The time an operator has at the WTP meant visual inspection of the blanket performance and flocculent carry-over was limited. Also TRC rotate operators at the WTP and one operator’s perception of a blanket and flocculent carry-over can be very different from that of another operator.

By utilising the trended graph, the performance of the clarifier can be monitored remotely and over the complete operational cycle of the WTP. Any change in coagulant, or PAC dose, can be monitored for its effectiveness and has resulted in no filter turbidity breakthroughs at the time of writing this paper, since its installation. 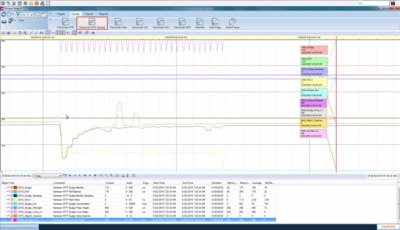 Enhanced coagulation is a term heard only recently in the industry. A quick Google search states “Enhanced Coagulation is the term used to define the process of obtaining improved removal of disinfection by products precursors by conventional treatment”. Often it involves lowering the pH considerably between 5–6 to achieve desired results.

Other factors in the treatment process seem to impact on the turbidity and TOC removal efficiency to further enhance the coagulation process effectiveness.

That TOC removal efficiency can be increased by increasing the coagulant. However, this high dose of coagulant does result in large amounts of flocculent creation and carry-over — and therefore requires frequent backwashing to maintain filter performance.

Acid dosing was trialled in October–November of 2017, but results did not show it was effective in increasing TOC removal. The pH level in the treatment process was however only dropped to slightly below pH 7.0 because no ability for pH correction exists at the WTP. The TOC removal efficiency as a percentage has been seen as high as 40% dosing coagulant at 20 mg/l and PAC at 5 mg/l. Dosing PAC at 5 mg/l would indicate it increases TOC removal efficiencies by between 5–10% over whatever TOC removal occurs from coagulant alone.

The aeration system perhaps indicates it can reduce THM levels by 10–20%. However, the ideal situation would be not to create THM, rather than have to remove them after they have been created.

Operators had a similar problem with TOC results as they had with THM results. TOC results were usually seen 1–2 weeks after samples were collected and if both raw sources and treated water were sampled weekly they proved to be costly.

The availability of an in-line sensor was investigated, and in August 2018 an in-line TOC sensor was installed. The operators can see TOC results in real time. Results are graphed using the SCADA system and a rising trend or changes to TOC either in the raw or treated water can be identified. 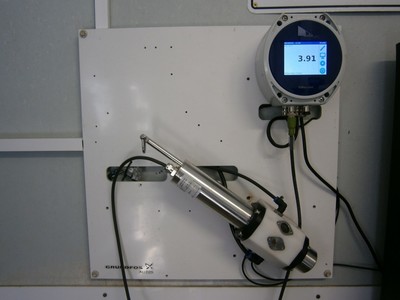 Figure 2: The TOC sensor at Yarraman.

Monitoring TOC levels on-line quickly shows the removal efficiency. It also provides a quick and reliable indication of the effectiveness of any changes made to the process or chemical doses. Using TOC results allows the operators to be confident in the treated water quality and the performance of the treatment process. It also allows the operators to determine the extent of the TOC removal efficiency needed through the enhanced coagulation process to eliminate THM exceedances into the future.

THM exceedances were still a problem even with low turbidity in the treated water. Average treated water turbidity in early 2018 after the filter media was replaced was 0.16 NTU and was usually below the 0.15 NTU range which puts it within the proposed ‘health limits’. However, THM exceedances still occurred. After the introduction of the sludge monitor, a change of coagulant, introduction of enhanced coagulation, and operators using TOC levels as their guide parameter from March, the average turbidity in the treated water had dropped to average 0.08 NTU and no THM failures occurred.

From October 2017 weekly THM results, TOC results, and %TOC removal efficiencies were recorded along with any operational changes or plant upgrades such as the sludge monitor installation and filter media replaced noted.

These results may not satisfy scientific scrutiny with samples collected weekly and when changes were made the next sample determining its effect. They did however provide a guide to what worked and what effect it had.

From these results it has been determined that TOC level in the treated water provides a guide to the potential of THM formation in the reticulation.

The percentage of TOC removal efficiency has showed the effectiveness of enhanced coagulation and also the impact of PAC on TOC removal.

The THM limits within ADWG have not been exceeded in the Yarraman network since March 2018.

The sludge monitor provides a visual reference of what is happening with sludge blanket and fluff layers in the clarifier. Using the sludge monitor to automate the sludge drain process has allowed flocculent carry-over to be minimised and controlled throughout every run cycle of the plant.

By monitoring TOC levels, easier determinations can be made on plant performance and the likelihood of THM to be formed in the reticulation. A TOC target can be set to provide that confidence. This same confidence cannot be provided when using turbidity levels alone.

The required TOC removal efficiency can be determined by using the treated water TOC target and if enhanced coagulation is required to meet this target its effectiveness can be monitored.

If a turbidity level of 0.08 NTU in the treated water is used as the target to control THM formation, overdosing of coagulant and PAC would occur to meet this NTU figure when it may not be required to ensure THM exceedances do not occur during low TOC periods.

Limited results and data has been recorded and analysed and further work will need to be done to be 100% sure of the results seen so far. However, performance of the treatment process has been more reliable and THM exceedances have been eliminated as of the time of writing.

Enhanced coagulation at low pH levels may significantly increase TOC removal, however the above results have occurred without acid dosing to lower pH. Average raw water pH levels between July 2017 and June 2018 were 7.5 pH raw and 7.7 pH treated.

What technologies are having an impact in aged care?