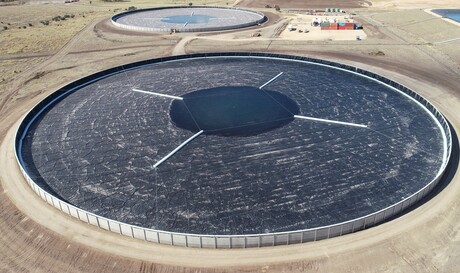 Concept Environmental Services (Concept) has completed construction of a 112-megalitre Saline Effluent Management System (SEMS) for a key CSG customer. The system consists of two Concept Tanks that each hold up to 56 million litres of brine produced by operations in the area.

This project is claimed to be the first of its kind in Australia, which will see a 30% reduction in brine processing time, meaning land can be returned to property owners years ahead of historical brine processes, providing considerable cost savings in land leasing fees.

Brine is a by-product of coal seam gas production, historically stored in massive brine ponds to evaporate and allowing sludge to be disposed of. However, this method has proven ineffective, creating an ongoing concern for operators.

What is the problem with brine ponds?

Large bodies of naturally salty fluids (brine) are subject to the ‘Lake Effect’, which shows that the larger a body of water, the less effective evaporation becomes. Salt then creates a crust over the surface, further reducing evaporation and resulting in very large dams of stagnant fluid remaining unchanged indefinitely.

The Concept’s SEMS utilises the patented Concept Tank, which is a pre-stressed modular concrete structure taking up an area a third the size of a brine pond.

In addition, the 3-metre-high walls exclude ground animals from accessing the brine, protecting against poisoning as well as prohibiting damage to liners.

The Concept Tank is installed with double-lined leak detection and 24-hour monitoring, which notifies remote operators in the event of a primary liner breach, while the secondary liner acts as a ‘closed loop’, protecting the environment from contamination.